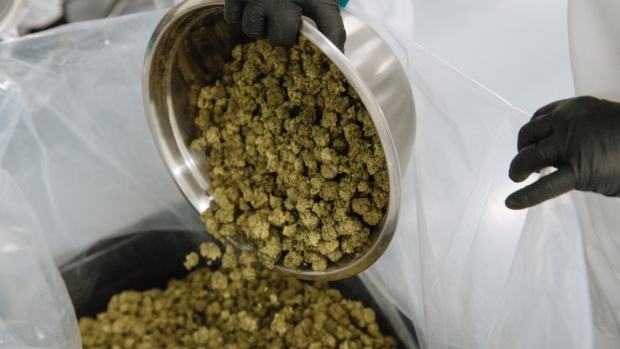 A worker pours a bowl of manicured buds into a bag at the CannTrust Holdings Inc. cannabis production facility in Fenwick, Ontario, Canada , Bloomberg News

CannTrust Holdings says Health Canada has reinstated the pot producer’s licences at its Vaughan, Ont. manufacturing facility. Last August, the regulator found CannTrust broke several rules, including insufficient security controls and areas constructed without regulatory approval. "Our licence reinstatement is the result of an enormous amount of hard work by the CannTrust team," CEO Greg Guyatt said in a release Thursday. "Today marks the beginning of the next chapter in CannTrust's history.” The company said it will restart manufacturing at its Vaughan facility imminently and that it expects to have products available in the fourth-quarter of this year. In May, Health Canada reinstated the licence for its Fenwick, Ont. facility, nearly a year after inspectors first discovered marijuana grown in unlicensed rooms.

Toronto-based cannabis producer Cronos Group announced a second-quarter loss of $3 million on Thursday, hampered by a $3.1-million inventory writedown it blamed on industry price compression. Net revenue checked in at $9.9 million, a $2.2-million bump from the same period in 2019. Cronos also announced that it has launched a medical line of dried flower in Israel under the name Peace Naturals. The company also issued an update on how the COVID-19 pandemic has impacted business, stating that while it has ‘sufficient inventory,’ unplanned closures at the manufacturing or vendor level could cause a supply-chain disruption.

Girls' Night Out is getting into the cannabis game

The company behind popular Girls' Night Out wine is getting into the cannabis business. Ontario-based Colio Estate Wines announced Thursday a supply agreement with Natural MedCo Ltd., the wholly-owned subsidiary of Eve & Co., for an initial three-year period to create cannabis-infused beverages. The chief executive of Eve & Co. said the company is excited to work with the team behind the Girls’ Night Out brand, noting it allows them to "provide consumers with a new cannabis-infused beverage which aligns very well with our female-oriented vision.”

Ontario-based cannabis company TerrAscend Corp. is releasing preliminary financial results for its second quarter. The company said Thursday its U.S. business generated 90 per cent of its net sales, boosting total revenue by 36 per cent year-over-year to $47.2 million. “Our strong top and bottom-line performance reflects our unwavering commitment to achieve best-in-class results from our operations,” said Jason Ackerman, CEO and executive chairman of TerrAscend. “With cultivation at our New Jersey production facility underway and our Pennsylvania operations continuing to track ahead of plan, I am confident we can continue this solid momentum into the second half of the year.” The company will post its final second-quarter results Aug. 20. 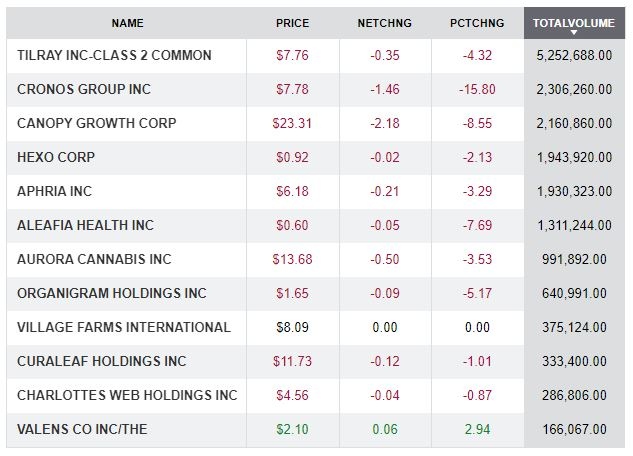