Ontario has begun legal sales of cannabis 2.0 products. The Ontario Cannabis Store, the province’s pot distributor, has released 59 new products including edibles, beverages, lotions and concentrates. The products will be available at physical stores starting today and online starting Jan. 16. The OCS warns supplies are tight and some products could sell out quickly. Edibles will range from $7 to $14, beverages $4 to $10, and vapes $25 to $125.

Tokyo Smoke is adding to its retail footprint. Canopy Growth Corp.’s retail brand has struck partnerships with several Ontario cannabis retail licence holders to establish another five locations in the province. It adds to its previously-announced store openings, bringing the total number of brick-and-mortar locations the brand expects to open in the first half of the year to 10.

FSD Pharma is set to begin trading on the Nasdaq this Thursday. The Ontario-based cannabinoid pharma company says it’s been approved to start trading on the index under its current ticker ‘HUGE,’ while maintaining its listing on the Canadian Securities Exchange. The new U.S. listing will open up a much larger potential investor base.

While Canada’s pot players have high hopes for the addition of edibles and vape products hitting the market, they are also exercising caution in how they roll them out, according to analysis released Monday from Raymond James. The research firm looked at staggered rollout plans for so-called 2.0 products from the likes of Organigram Holdings Inc., Cronos Group Inc., Aurora Cannabis Inc., Tilray Inc. and Canopy Growth Corp., and determined that the industry won’t see the full extent of those sales until the end of 2020 or even the first quarter of 2021. One of the biggest contributors to the delay will be vape products, according to Raymond James. “ Some Canadian provinces (Quebec, Newfoundland, and most recently, Alberta) have decided to not allow cannabis vape sales until fleshed-out public health conclusions can be made. We see this as a key issue facing Canadian cannabis operators as they maneuver toward the high value Cannabis 2.0 markets,” the analysts wrote.

Aurora Cannabis is looking to sell a greenhouse in Exeter, Ont. for $17 million, according to a report from Bloomberg News. A listing seen on Cushman & Wakefield’s website advertises a 22-acre greenhouse with a 15,000-square-foot propagation area on Exeter’s Airport Line, the same location as a greenhouse the pot producer obtained as part of its $3.2 billion acquisition of MedReleaf Corp. in 2018, the report said. “This listing, for 75 [per cent] of former MedReleaf’s capacity, signals major writedowns ahead,” MKM Partners analyst Bill Kirk said in a note Monday. 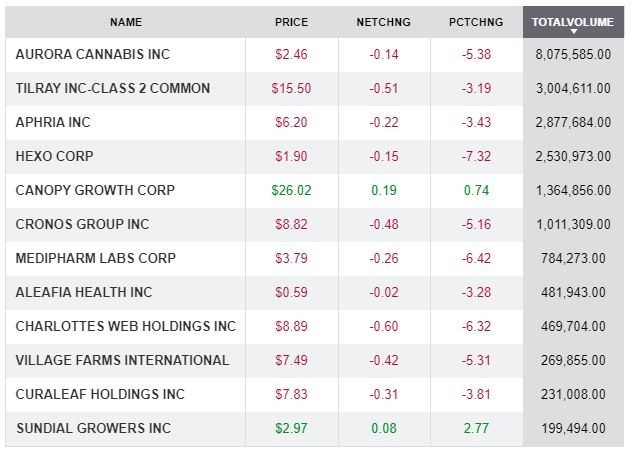