Cowen & Co. cannabis analyst Vivien Azer is “harmonizing” the firm’s valuations on some Canadian cannabis players amid some ongoing headwinds in the sector. Cowen cut its 12-month target on Tilray to US$60 from US$150, while slashing Cronos’ price target to $17 from $21. Azer said the revised valuations come as “too few stores, supply shortages and a lack of novel products have hampered category development.” She did note, however, that she expects the Canadian market to recover in the next year or so, as the aforementioned issues get resolved and new product categories like vaping and edibles are introduced. She also reaffirmed her forecast that the Canadian industry will become a $12 billion market by 2025.

It’s another setback for beleaguered cannabis producer CannTrust as the company is expected to be dropped from Canada’s benchmark stock index this month, The Globe and Mail reported. CannTrust’s recent slide – which came after its announcement that the company was found to be non-compliant following a Health Canada site inspection - has put its market valuation outside the threshold for membership in the S&P/TSX Composite Index. Its removal from the TSX Composite is likely to see large-scale index funds sell off their position in the company, which could result in as many as 4.8 million shares hitting the open market.

Woman says her lifetime ban to enter U.S. after being caught with CBD oil has been reversed

A woman who found herself banned from entering the U.S. after she was found with cannabidiol (CBD) oil at the border has had her lifetime ban rescinded, the CBC reports. The unnamed woman’s lawyer told the CBC that she was contacted recently after a media outcry and was told her inadmissibility case had been reversed. As a result, she would no longer be required to apply for a special $585 waiver to enter the U.S. Despite CBD products being legal in both British Columbia and Washington, cannabis possession remains a federal criminal offence in the U.S., and border is governed by federal law. “Going forward all I can tell people is to be cautious on what they bring to the United States because who knows, today CBD oil is OK, but CBD oil next month may not be,” said Len Saunders, the woman’s lawyer.

RavenQuest BioMed is heading across the pond. The Canadian cannabis company said in a release on Tuesday that it formed a joint venture with Cannabis Biocare to construct cannabis cultivation facilities in Europe. The new venture plans to build two cannabis cultivation facilities in Portugal, with an option for further expansion across Europe. The Portuguese facilities will be equipped with RavenQuest’s “orbital garden” grow technology and will have enough capacity to produce 35,000 kilograms of cannabis earmarked for Europe’s medical market.

$7 million
-- The amount in sales generated by Ottawa cannabis store Superette in five months of operation. Since it opened its doors on April 1, the company has processed over 128,000 transactions. 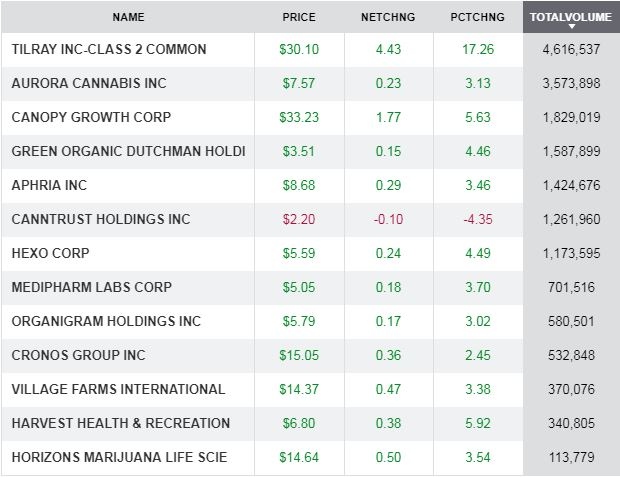