Aphria and Aurora Cannabis​ recently held advanced talks to merge the two Canadian pot producers in what would have been a blockbuster deal, but those discussions broke down late last week, sources told BNN Bloomberg. The two companies opted to step back from merger discussions that took place over several weeks after failing to agree on board composition and compensation for some senior executives, the people told BNN Bloomberg under the condition of anonymity. Had a deal had been reached, it would have created a global cannabis behemoth valued at $3.5 billion with operations in 25 countries. It would have commanded a leading 30-per-cent share of the Canadian recreational cannabis market and combine for annual revenue north of $800 million.

Canadian cannabis retailer Inner Spirit Holdings said Tuesday it appointed former Deloitte vice-chairman Frank Rochon to its board. Rochon, who was a member of Deloitte's executive leadership team for over 20 years, will be part of Inner Spirit's audit committee, the company said in a statement. Inner Spirit currently operates or has franchise agreements with 54 licensed cannabis stores across the country, and expects to open three more stores in Ontario after receiving authorization licences from the provincial retailer. Inner Spirit said it has another 16 locations in Ontario and seven in Alberta under various phases of development.

Trulieve to become “domestic issuer” in U.S., to be subject to SEC reporting rules

Florida-based cannabis operator Trulieve said Tuesday that it plans to transition to a "domestic issuer"​ now that a majority of the company's shareholders are now based in the U.S. The company said in a statement it will be subject to U.S. Securities and Exchange Commission reporting requirements no later than January 2021, which will demonstrate a change in reporting to U.S. GAAP accounting standards. Trulieve will continue to be a B.C.-based corporation and its shares will continue to trade on the Canadian Securities Exchange, the company said.

Toronto-based MediPharm Labs said Tuesday it appointed BMO Capital Markets chief operating officer Chris Taves to the company's board. Taves, who previously ran BMO's global markets desk, will lead MediPharm's audit committee and be one of five independent directors on the company's board. MediPharm said it would grant Taves 300,000 options over a five-year term at an exercise price set on Monday's closing price. 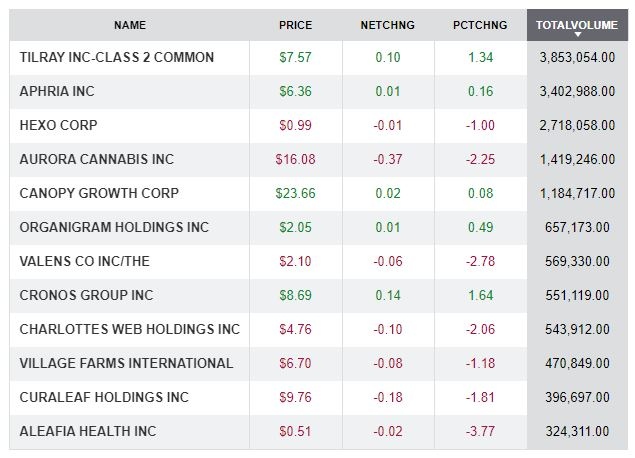