Why Auxly skipped first phase of marijuana products to focus on cannabis 2.0

Aphria shares under pressure after Q2 results come in below expectations, outlook slashed

Shares of Aphria were hit hard on Tuesday after the cannabis producer slashed its full-year outlook while reporting second-quarter revenue that came in below analyst expectations. Aphria said it made $120.6 million in Q2 revenue, an increase of 457 per cent from the same period last year, but shy of the $130.4 million analysts expected. Citing a slower-than-expected retail rollout in Ontario and issues with vape sales in Alberta and Quebec, Aphria also adjusted its forecast for fiscal 2020 with revenue projections now believed to be approximately $575 million to $625 million, down from the $650 million to $700 million the company previously forecast. Aphria Chairman and CEO Irwin Simon told BNN Bloomberg that he sees too many players in the Canadian cannabis industry relative to the amount of existing demand for product and expects to use some of the $500 million in cash the company has on hand for potential consolidation in the sector.

Organigram shares soared in after-market trading after the company said its revenue more than doubled to $25.2 million from $12.4 million from the year-earlier period, well above analyst expectations of $19 million. The Moncton, N.B.-based cannabis producer also reported that its adjusted EBITDA dipped to $4.9 million from $6.8 million a year earlier but still came in above the $1.9 million adjusted loss analysts were forecasting. In a release, Organigram said it has enough capital to fund its operations and capital expenditure plans with about $34 million in cash by the end of the quarter. The company also reduced its industry-leading cultivation costs to 61 cents per gram from 66 cents per gram from the prior quarter.

Is it time for a cannabis company to start issuing a dividend? Despite the current state of the industry, Aphria’s CFO floated the idea in a conference call with analysts on Tuesday, when stating the company’s plans to return money back to shareholders. Aphria has now posted three consecutive quarters of positive adjusted EBITDA – although its Q2 figure was a scant $1.9 million – the performance remains a relative rarity within the cannabis industry. Merton said Aphria will continue to post positive adjusted Ebitda which will help it “both internally finance future growth initiatives and, in the future, being in the position to provide an annual return to our shareholders through dividends.”

US$19.7 million
-- The amount of legal cannabis sales in the first 12 days of legalization in Illinois, according to the Daily Herald. 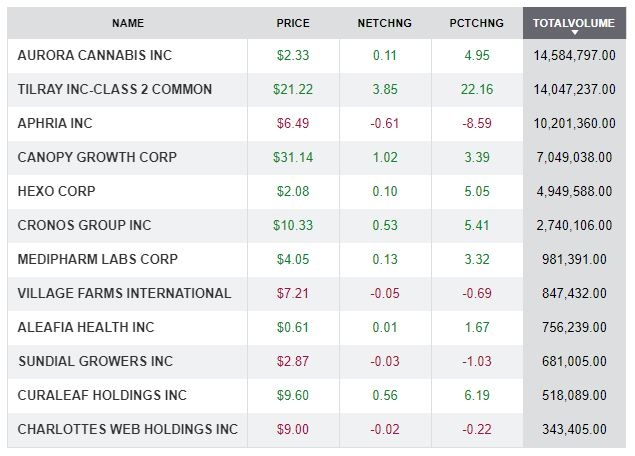