Shares of Aphria plunged on Thursday after the company's fiscal first-quarter results failed to meet analyst expectations. But behind the revenue and earnings misses, the results showed a cannabis producer that continued to see growth in its Canadian recreational pot business, reaffirming its position as the market leader at least in Ontario and Alberta, where sales figures are available. In an interview with BNN Bloomberg, Aphria CEO Irwin Simon said he expects Cannabis 2.0 products including drinks and edibles will be launched sometime early next year. "We want to focus on where consumers are going rather than what consumers want," Simon said. "To some degree, I don't mind being slower because I don't want to have something that consumers don't want and I don't want to make the same mistakes." Simon also expressed his thoughts on consolidation in the Canadian cannabis sector, telling BNN Bloomberg he expects to be a player in future M&A but only if a deal is the right one.

Canadian cannabis retailer Fire & Flower Holdings took a broader step in securing its presence in Canada's biggest city by announcing it acquired three Toronto-based pot shops on Thursday. Fire & Flower said it will pay $750,000 plus about 2.2 million shares for the Satica Cannabis outlet in downtown Toronto, while it will acquire two NCannabis stores for $700,000 and 2.2 million shares. The acquisitions are subject to approval from provincial regulators and they’re expected to close in early November. The deal would give Fire & Flower seven stores in Ontario, including five in the Greater Toronto Area. Stifel analyst Justin Keywood said in a report that the cannabis retail sector is expected to see further consolidation as players look to gain market share. The retailer's shares edged higher by about 1.2 per cent on Thursday.

Shares of Valens Company were down slightly on Thursday after the cannabis extractor announced its third-quarter revenue came in at $18.1 million while still booking a $3.1 million loss. Valens said it made 56 different products for the cannabis market during the quarter with formats ranging from disposable vape pens to beverages and concentrates, up from 36 items it made in the prior quarter. Canaccord Genuity analyst Matt Bottomley views Valens' quarter as "transitional," as its traditional toll extraction business faces a challenging backdrop. He expects the revenue weakness in its toll business to be "largely periodic" as it should improve once more retail outlets open up in Ontario.

It might take a few weeks to determine whether New Zealand will follow Canada's footsteps in legalizing recreational cannabis, Marijuana Moment reports. The website said that the country's referendum this Saturday on whether its populace wishes to legalize the drug may not see final results until Nov. 6, although preliminary numbers will be available a week prior. Recent polls suggest New Zealanders are split on whether to legalize cannabis, with opponents concerned that allowing recreational sales would increase youth usage of the drug and won’t end the country's illicit market.

20,882 kilograms
- The amount of cannabis sold by Aphria in its latest financial quarter. 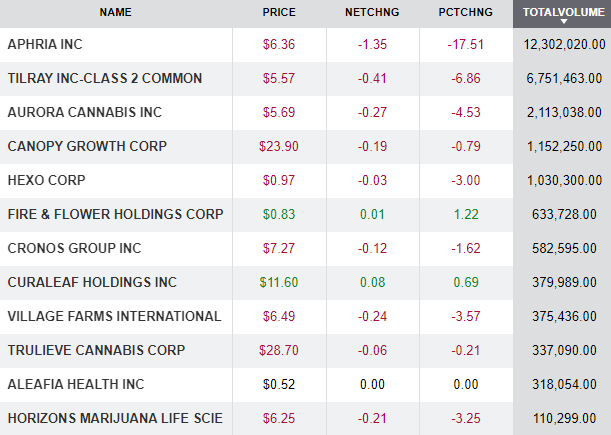