Aurora’s Booth to step down as CEO, Singer in as interim CEO; to lay off 500 staff

Aurora Cannabis Inc.’s Terry Booth is stepping down from his role as chief executive officer after seven years in the top job, the company announced Thursday. Booth will be replaced by the Edmonton-based company's executive chairman, Michael Singer, on an interim basis. Booth will remain on the company's board in a strategic advisory role. Aurora also confirmed it will reduce its workforce by 500 staff, including 25 per cent of all corporate positions. The change at the top comes as the pot giant looks to press the reset button following several quarters of disappointing sales and mounting losses.  The company released preliminary second-quarter results and now plans to report between $50 million to $54 million in net revenue in the quarter, far below analyst expectations.

U.S. hemp producer GenCanna has filed for voluntary Chapter 11 reorganization in a Kentucky court, the company announced on Thursday. GenCanna said the bankruptcy filing will allow the company to continue operating as it looks to refinance its existing debt or a potential transaction that may include a sale. The company also obtained about US$10 million in debtor-in-possession financing from its senior lender. GenCanna has recently faced delays with a processing plant as well as a fire at its headquarters, while facing lawsuits from hemp farmers alleging they'd been given poor seed and that the company had reneged on promises, according to the Louisville Courier Journal.

The National Cannabis Industry Association announced on Thursday it added several new members to the U.S. cannabis trade association’s board of directors. The new members include Narbe Alexandrian, the president and CEO of Canopy Rivers, the venture capital arm of Canopy Growth, as well as Liz Geisleman, vice president of Rocky Mountain Reagents and Ryan Hurley, general counsel for Copperstate Farms, one of the U.S.’s largest licensed medical cannabis producers. The new board members will sit for a two-year term.

Psilocybin-wellness company Field Trip Psychedelics bolstered its balance sheet on Thursday, raising US$8.5 million in an oversubscribed Series A financing round, the company said in a statement. Field Trip said the funds will be used to build a series of medical centres focused on psychedelic-enhanced psychotherapy as well as the completion of a research and cultivation facility at the University of the West Indies in Jamaica. The financing was led by the company’s founders and includes Subversive Capital, Silver Spike Capital and Ben Greenfield, a “longevity expert and biohacker.”

$1.5 billion
-- The amount of capital raised in initial public offerings on the NEO exchange in 2019, the entirety of which was cannabis-focused. 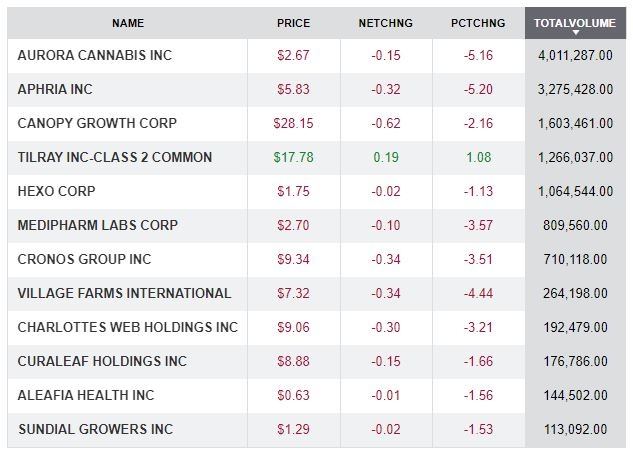