Aurora's write-downs are about 'cleaning up the past': Executive chairman

Aurora looks from within for new CEO appointment, expects to take up to $1.8B in Q4 writedowns

After more than six months, Aurora Cannabis finally has a new permanent CEO. The Edmonton-based pot giant said Tuesday it has appointed Miguel Martin, the company's chief commercial officer and a former Altria executive, as its new CEO. The announcement comes just months after Aurora acquired his U.S. CBD company Reliva. Martin comes into the role with a big task: impress investors with a long-term strategy to turn the Aurora story around. Martin will certainly have his work cut out for him, with the company also announcing Tuesday it expects to take a $1.6-billion-to-$1.8-billion writedown on goodwill and asset impairment when it reports its quarterly results this month. Aurora will also end its CBD deal with the UFC and said its fourth-quarter revenue will come in between $70 million and $72 million, slightly less than the prior quarter. BMO Capital Markets analyst Tamy Chen said Martin's hire is "appropriate in introducing discipline to Aurora's business model," but that the company's next moves will be challenging given the competitive state of the Canadian cannabis market.

After months of ownership squabbles, Village Farms International announced Tuesday that it will buy the rest of the Pure Sunfarms stake it doesn't own from Emerald Health Sunfarms for $79.9 million. Village Farms already owned about 58 per cent of Pure Sunfarms and plans to pay for the remaining stake with cash and a $19.9-million promissory note due six months after the deal is scheduled to close. Village Farms said its Pure Sunfarms subsidiary generated $30.9 million in revenue in the first six month of the year, and net income of $9.6 million. Pure Sunfarms has about a 5.6-per-cent share of the Canadian cannabis market, according to Stifel analysts. Separately, Village Farms said it will raise US$49.8 million in a direct offering that is expected to close later this week. Raymond James analysts say the acquisition "redoubles [their] confidence" that Pure Sunfarms is the "best-in-class in the Canadian cannabis sector."

Cannabis edibles manufacturer Dynaleo has struck a supply deal with High12 Brands to launch a series of premium gummies in Canada later this year. The three-year deal will see High12 sell its infused edibles under multiple brands, with unique flavours and form factors in both CBD and THC options, High12 president Michael Garbuz told BNN Bloomberg. High12 has been selling pre-rolls and dried flower in several provinces under its "Kingsway" brand, and plans to launch vape products next month under its partnership with extraction company Valens, Garbuz said.

Former Senate majority leader Tom Daschle said the next U.S. president should legalize cannabis to help spur a positive impact for the ailing U.S. economy. In an op-ed published Tuesday in The Hill, the former politician said legal cannabis will help create new businesses, new jobs, generate additional tax revenues and end the disastrous war on drugs. Like with alcohol, legalizing marijuana can be done safely and responsibly, Daschle said. "An organized regulatory framework will provide tax revenue for underfunded governments, enable companies to act carefully, innovate with safe and legal products, and allow for necessary scientific medical research to be funded and conducted," he said. Daschle serves on the board of Latin American cannabis operator Clever Leaves. 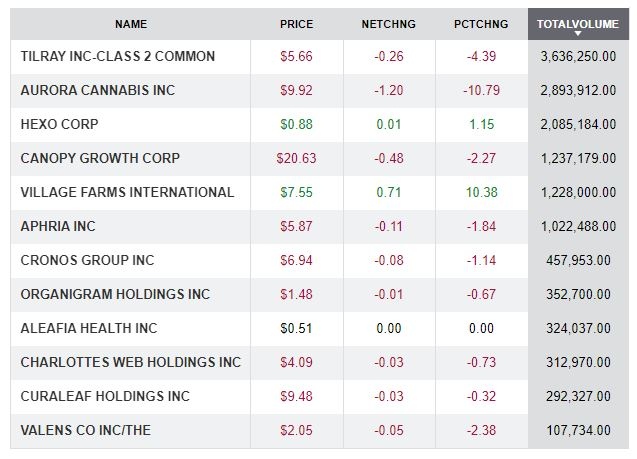