Aurora to cut 10% of its workforce, source says

Aurora Cannabis to cut workforce by about 10%: Source

First it was Tilray, now it’s Aurora’s turn to announce a round of job cuts. BNN Bloomberg was first to report that Aurora Cannabis plans to cut its workforce by about 10 per cent, the latest cannabis company looking for ways to trim costs as it eyes profitability. The company, which has approximately 3,400 employees across more than 20 countries around the world, is expected to announce the job cuts in the next few days, according to a person directly familiar with the matter. An Aurora spokesperson said the company doesn’t comment on speculation or rumours.

Kentucky residents nearly-unanimously backed the legalization of cannabis for medical purposes, while a majority endorses legalization of recreational sales of the drug, according to a poll conducted by a non-partisan group. The Foundation for a Healthy Kentucky said in a release that 90 per cent of Kentucky adults favor legalizing marijuana for medical purposes and nearly 60 per cent say pot should be legalized across the board. Positive sentiment on cannabis from Kentucky residents has risen sharply over the past several years, in large part following the lead of the 33 states and the District of Columbia that have legalized medical marijuana. Another 11 states have legalized recreational use.

Whoopi Goldberg’s foray in the cannabis industry appears over for now. The comedian and host of The View is no longer backing a company that would sell, manufacture and market its several cannabis products geared towards women due to a split between Goldberg and her business partner, according to Celebstoner. The website reports that Goldberg submitted her resignation from the company to its board last month, ending her four-year relationship with the firm. The brand, dubbed “Whoopi and Maya” sold four products in California and Colorado aimed at treating menstrual discomfort.

Cannabis data provider and event organizer Lift & Co reported its third-quarter results late Tuesday, posting an 11 per cent year-over-year increase in revenue to $926,000, while narrowing its net loss by seven per cent to $2 million. The company, which holds two cannabis industry events in Vancouver and Toronto every year, plans to expand into the U.S. market through several content partnerships over the next year. Lift & Co said it sold almost 900 licences for its CannSell, a requirement for Ontario “budtenders” to be able to sell legal pot in the province.

$13,243,000
-- The size of the loan given to TerrAscend by Canopy Rivers after the two companies had to amend the terms of an earlier agreement to abide by Toronto Stock Exchange policies. 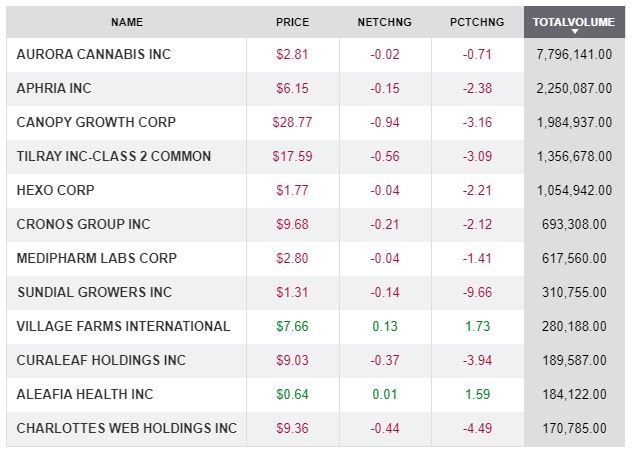