Aurora sold its remaining 10.5 per cent ownership stake in The Green Organic Dutchman after markets closed on Tuesday in a block sale that was coordinated by a syndicate of Canadian banks, both companies said in separate statements. The sale of 28.8 million shares at $3 per share generated $86.5 million in proceeds for Aurora. The sale allows Aurora to further pad its cash reserves as it continues its build out its cultivation and processing footprint, while mitigating some investor concerns around its quarterly cash burn, according to Seaport Global Securities analyst Brett Hundley. Meanwhile, TGOD will likely see increased liquidity for its stock and a larger share of institutional owners that would beneficial for the company’s application to be up-listed to the NASDAQ exchange, Hundley added.

Fire & Flower is bolstering its cannabis retail presence after announcing it plans to acquire eight proposed stores owned by Cannabis Cowboy across Alberta in a cash-and-stock deal worth $5.6 million. The new stores are at various stages of development, including two fully built and a third requiring minimal construction to be completed prior to licensing, Fire & Flower said in its release. The company now has 27 operating stores across Canada, and plans to open a number of new stores over the next month, including its first outlets in Manitoba and Yukon, according to a company spokesperson in an email to BNN Bloomberg. Fire & Flower’s deal for the eight stores comes a week after Tilray spent up to $110 million for Alberta cannabis retailer Four20 which has 22 locations in the province.

Aleafia doubles down on outdoor grow with $1.2M farmland deal

Aleafia Health is expanding its outdoor grow facility in Ontario after acquiring 60 acres of farmland adjacent to its current site. The company said it is buying the land for $1.2 million which would net it 86 acres of outdoor space earmarked for cannabis cultivation and production. Aleafia said it plans to amalgamate the two lots which would allow it request an amendment from Health Canada to its current licence, rather than apply for an entirely new license from the federal regulator. The company previously said it expects to produce 60,000 kilograms of cannabis annually from its existing outdoor grow location.

Controversial cannabis industry investor Andy DeFrancesco is stepping down from his role as chairman and chief investment officer of U.S.-based cannabis operator SOL Global. DeFrancesco said in a statement he plans to take on a new role leading an independent investment company, SOL Investment Group sometime in October. DeFrancesco’s investment firm will be spun out of SOL Global and operate completely independent of the previous company, which also plans to spin off all of SOL Global's non-cannabis assets not under its umbrella to SIG.

2,027
-- The average number of customers that Planet 13 Holdings’ Las Vegas cannabis dispensary served in August, the company said in a release. 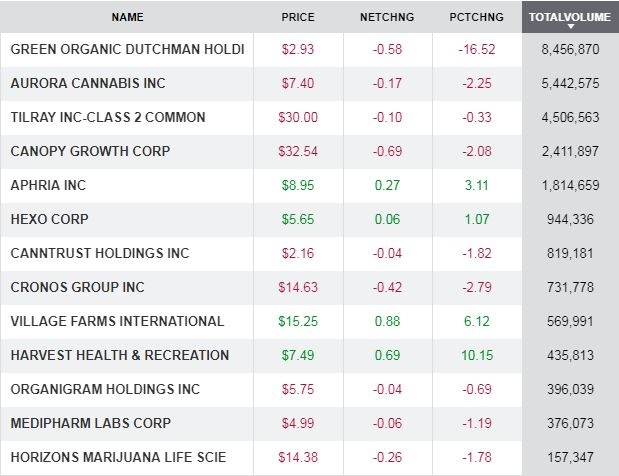