Aurora Cannabis’ balance sheet is becoming a growing problem for the Canadian pot giant. The Edmonton-based company was hit by two analyst downgrades on Friday – Piper Sandler and Bank of America – which cautioned that Aurora may be unable to meet the covenants on a $360-million loan coming due in August 2021. Piper Sandler analyst Michael Lavery also said in his report that Aurora is likely to generate negative cash from its operations until the fiscal third quarter of 2021. The company’s shares slid as much as 11 per cent following the downgrades. Aurora executives didn’t respond to requests for comment on the analyst reports by BNN Bloomberg.

Canadian cannabis retailer Inner Spirit Holdings said in a statement on Friday it made more than $29 million in retail sales while serving about 740,000 customers last year. The company has 43 Spiritleaf cannabis retail stores across the country with another nine set to open their doors in Alberta and British Columbia in the near term, Inner Spirit said. The retailer plans to reduce the amount of equity in the company that third-party cannabis producers own in Inner Spirit below the 25 per cent mark – currently Auxly Cannabis, Tilray and Hexo have stakes in Inner Spirit. Inner Spirit also submitted applications to open 15 cannabis stores in Ontario earlier this month, pending all regulatory and operating approvals.

Cannabis extractor Neptune Wellness Solutions plans to launch its own consumer product in the next month, the company said in a statement on Friday. Neptune said it has a portfolio of hemp-derived wellness products set for the U.S. market which includes soft gels and oils, topicals and a pet soother. The company also plans to expand its Sherbrooke, QC facility to help increase its extraction, purification and manufacturing services for the Canadian cannabis market. Neptune has applied to Health Canada to obtain a licence to sell cannabis products in Canada, but didn’t disclose when it intends to get approval from the country’s regulator.

A top South African politician may be the country’s best bet to legalize cannabis in the future. Finance Minister Tito Mboweni tweeted out an image of a cannabis plant on his farm, asking his followers if he should cut it down or “just legalize this thing once and for all.” South Africa decriminalized the possession, use and cultivation of cannabis in 2018, although selling the drug remains illegal. Mboweni said in a subsequent tweet that legalizing cannabis could result in tax revenues of four billion South African rand, or about US$278 million, to the African nation.

$6.51
-- The price of a gram of cannabis in Canada, down 1.8 per cent from the prior week, according to the Cannabis Benchmark’s Canada Cannabis Spot Index. This equates to US$2,260 per pound at current exchange rates. 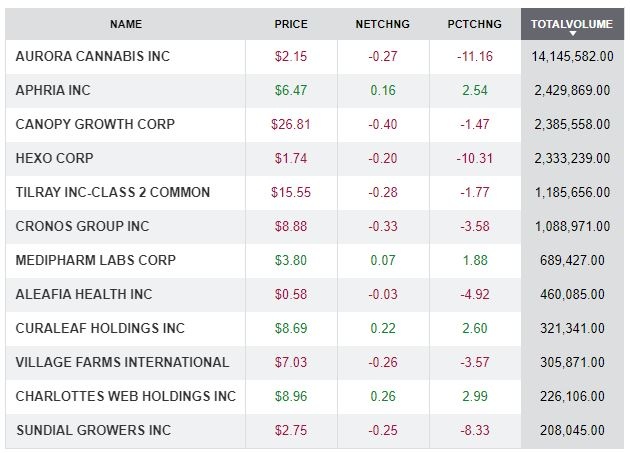