Aurora Cannabis Inc. continues to get smaller. The Canadian pot producer announced Tuesday that it plans to close five production facilities, a move that will result in 700 people being laid off and the company taking an impairment charge totaling $200 million. The closures come after a recent string of similar moves by other cannabis producers such as Canopy Growth and Tilray. The closures come amid an oversupplied Canadian market and a still-thriving illicit market. A company official told BNN Bloomberg that Aurora doesn't expect to see its total cannabis capacity decline as a result of the closures, and that it expects to meet Canadian consumer demand for the next two-to-three years.

Organigram Holdings issued a corporate update Tuesday, stating it has completed its at-the-market equity program and that it is revisiting one of its newly-launched brands. Organigram said it issued about 21 million shares, raising an additional $49 million in new capital. It also plans to change the brand and logo behind its "Trailer Park Buds" offering to better comply with restrictions on marketing cannabis in Canada. Organigram also stated it continues to monitor a class action lawsuit filed against the company that alleges the THC content in its products is not accurate. The action is yet to be certified and it "does not particularize the claims against Organigram or the other companies," the company said in a statement.

Vancouver-based Sunniva was also issued a cease trade order by provincial regulators, the company announced late Monday.​ Sunniva, which was trading at 15 cents per share on the Canadian Securities Exchange prior to the halt, said the British Columbia and Ontario Securities Commissions told the company it can no longer have its stock traded until it files several financial statements that are currently overdue. Sunniva said it is unable to estimate when it plans to complete and file those financial statements. 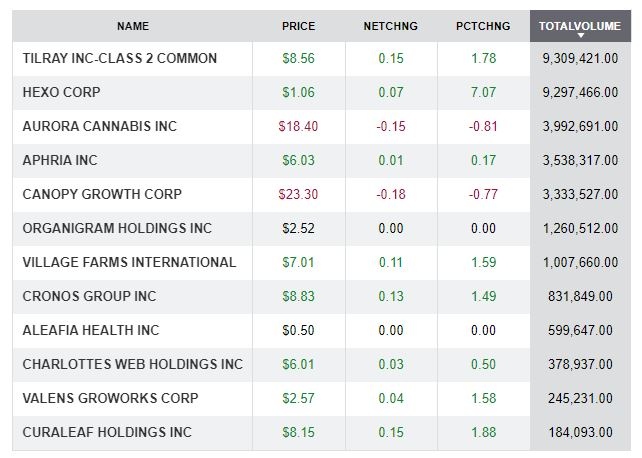