Billionaire activist investor Nelson Peltz is out as senior advisor to Aurora Cannabis, resigning to pursue other commitments. Peltz first joined Aurora in March 2019 under a senior advisory services agreement where he was tasked with helping the company devise a strategy to marry its cannabis business with the U.S. consumer market. Aurora awarded Peltz more than 19.9 million common shares at an exercise price of $10.34 per share over a seven-year period, vesting quarterly over four years. Peltz's departure comes several months after Aurora bought U.S. hemp retailer Reliva for US$40 million, a move that ultimately placed Miguel Martin as the cannabis producer's permanent CEO.

There's a new pot boss in Ontario. The province's cannabis distributor said Monday that it has appointed retail veteran Thomas Haig to run the Ontario Cannabis Store as hundreds of stores are set to open in the next year. Haig, who has previously held leadership roles at discount chain Giant Tiger and Hudson’s Bay Co.'s Zellers division, replaces Cal Bricker who took on the role a year ago. While Ontario was lambasted for losing $42 million in its initial year of running its cannabis business, it is expected to book an $80-million profit in its fiscal 2021, according to the government's recent fiscal update.

"Croptober" - the time of year where outdoor cannabis plants are harvested - may be at risk this year in some parts of the U.S. as wildfires continue to ravage California and Oregon, Bloomberg News reports. While the wildfires could destroy some production facilities, the smoke stemming from the blazes could also stunt the plants’ growth or accelerate flowering, which isn't opportune for some cultivators. Smoke could also lead to mould growth on some cannabis plants, which could mean up to 10 per cent of California's crop could fail lab tests, double the amount of a typical year. The fires are also likely to hit supplies and cause ripple effects across the country, Bloomberg reports.

Nanaimo, B.C.-based Tilray said Australian researchers using some of its medical cannabis for a study on the drug’s ability to offset some effects of chemotherapy has shown "promise." The preliminary results of the trial show that one-quarter of the cancer patients taking medicinal cannabis experienced no vomiting and nausea, compared to 14 per cent of people who took a placebo. A total of 81 patients participated in the study, which took place over a two-and-a-half year period. The next stage of the trial has commenced and it will look to recruit an additional 170 participants, one of the researchers said. 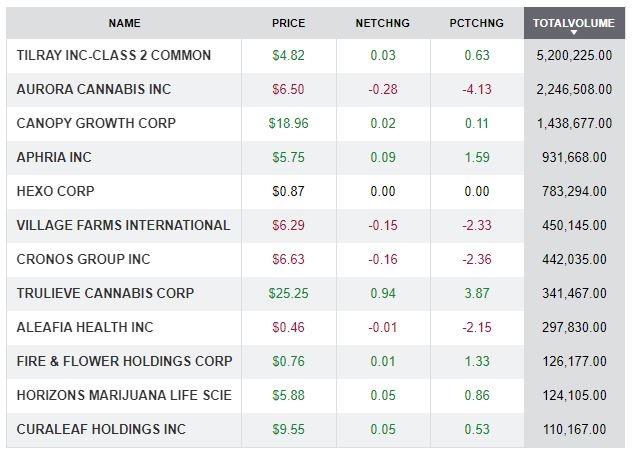