A baker’s dozen applicants for Ontario’s cannabis retail lottery have been struck from the winner’s list, the Alcohol and Gaming Commission of Ontario said on Friday. A dozen licence applicants who participated in the latest lottery have been disqualified for not providing required documents by a deadline earlier this week, while one participant withdrew from the process. All of the disqualified and withdrawn applicants have been replaced by those who the AGCO placed on a waiting list, while the remaining 29 move on to the next level of scrutiny which includes background and police checks. If successful, pot shop hopefuls should be issued a licence to open their doors by the end of the year.

Hemp may be the next big thing in the construction industry

Cannabis may emerge as a key ingredient for the construction industry looking to tackle a reduction in greenhouse gases. One Alberta-based company is looking to use hemp -- the boring cousin of marijuana devoid of psychoactive content – as a green alternative in concrete as the global economy pivots toward dramatically lower emissions. Hempcrete, as it’s called, provide structures with better ventilation, fire resistance and temperature regulation, according to Bloomberg. More importantly, hempcrete manufacturers say incorporating hemp in construction mixes captures 130 kilograms of carbon dioxide for each cubic meter of the product.

Planet 13 Holdings, operator of the biggest cannabis dispensary in the U.S., is moving a lot of product. The company said during its Q2 results that its Las Vegas SuperStore accounts for 9.5 per cent of all Nevada dispensary sales, compared to 7.9 per cent in the prior quarter. The company’s second-phase expansion to build a 15,000 square-foot production facility, a restaurant, a coffee shop, and event space is working “full steam ahead”. Planet 13 generated US$16.5 million in the quarter, while posting an EBITDA of US$2.7 million and a net loss of about US$935,000.

Canada’s legal cannabis industry output has doubled since the country legalized cannabis in October, and has almost surpassed the black market in less than a year. Statistics Canada released updated monthly and Q2 GDP figures on Friday, including details on the cannabis industry’s output in June. The cannabis industry’s output in June, based on seasonally adjusted figures and 2012 constant prices, came in at $7.79 billion, up from $6.95 billion back in October. Meanwhile, Canadian household cannabis consumption spending came in at $5.44 billion in the second quarter of the year. Perhaps more importantly, StatsCan data shows the output in Canada’s cannabis black market declined by 21% since recreational pot was legalized in Canada in October.

$6.72
-- The price of a gram of cannabis in Canada, down 3.9 per cent from the prior week, according to the Cannabis Benchmark’s Canada Cannabis Spot Index. This equates to US$2,293 per pound at current exchange rates. 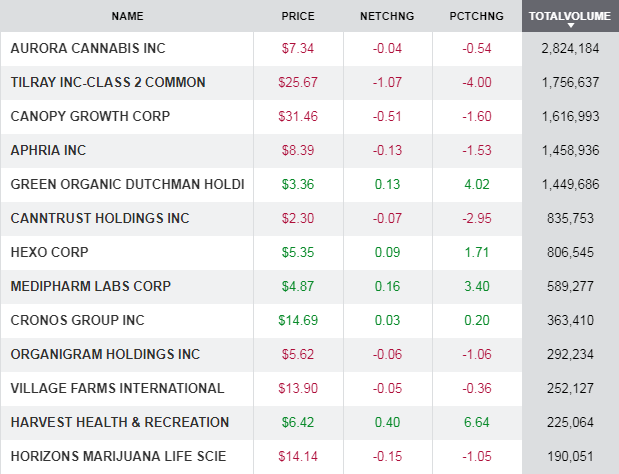