Bruce Linton: Pot sector's economic contribution should have been an election focus

Legal pot sales in Canada surge in August, led by Ontario and Quebec

Cannabis retail sales in Canada continued to climb in August, up 18.6 per cent from the prior month to $127.3 million, according to Statistics Canada. Canadian cannabis producers have sold a total of $807 million in the first 11 months of legalization. The sales increase continued to be driven but Ontario and Quebec, which reported $33.8 million and $26.8 million during the month, respectively. Pot sales in Toronto were reported to be $16.6 million, while Montreal notched $15.8 million, StatsCan said. Graeme Kreindler, an analyst with Eight Capital, attributes the sales increases to “positive seasonality effects, continued store growth, and increased product availability.”

Nunavut wants a bricks-and-mortar cannabis store. That’s what the Canadian territory’s finance minister told its legislature as Nunavut’s online sales portal hasn’t done enough to stamp out the black market, according to the CBC. While Nunavut doesn’t track black market cannabis sales, Finance Minister George Hickes said he doesn’t “believe we're making much of a dent at all right now.” In Nunavut, cannabis can be purchased legally online through retailers Tweed and Vertical Cannabis. A tender for a retail store in Nunavut closes at the end of the month, although there’s no guarantee a pot shop will open in the territory.

Pax Labs, one of the biggest cannabis vape companies in the world, is laying off one-quarter of its staff due to lower sales, MJBizDaily reports. The website said Pax will let go of 65 staff several weeks after an internal email from its CEO cited “budget adjustments” following a recent revenue miss. The layoffs also come less than a year after Pax raised US$420 million in financing, one of the biggest early-stage raises in the cannabis space. Pax recently signed deals with several Canadian cannabis companies to supply the domestic market with marijuana oil for its vape devices.

“It was a very costly summer for some people.”

– Former Canopy Growth co-CEO Bruce Linton on how the recent downturn in cannabis stocks impacted investors, including some at his former cannabis company. 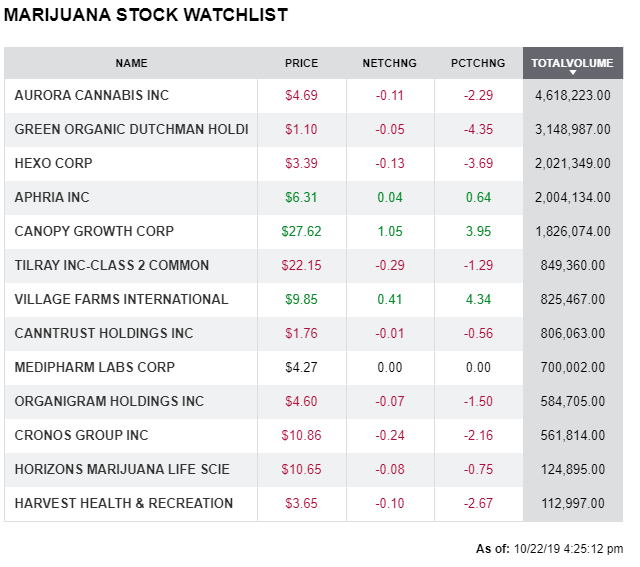