'We're not asleep at the switch': Marie Henein firm part of class-action lawsuit against CannTrust

Canadian litigator Marie Henein said that she expects the class action lawsuit centred on CannTrust Holdings should be certified by an Ontario judge in the next six to eight weeks. “The best outcome is the greatest amount of recovery for the investors to put them back in their original position,” Henein said in a BNN Bloomberg interview Tuesday. The high-profile lawyer said there are questions about CannTrust that need to be answered, including “things that jump off the financial statements.” A CannTrust spokesperson wasn’t immediately available to react to Henein’s comments.

Canadian cannabis retailer Fire & Flower said it forced the conversion of its unsecured debentures on Tuesday, a move aimed at strengthening its balance sheet. The company also said the early conversion would eliminate the interest payments associated with such debentures. Fire & Flower said two holders of the debentures agreed to the early conversion, but didn’t name them. A person directly familiar with the matter said the two holders were Hexo Corp. and Aphria, both of which own stakes in the retailer. A Hexo spokesperson confirmed that the company liquidated its position in Fire & Flower. An Aphria spokesperson wasn’t immediately available for comment.

Could psychedelic medicines become the latest hot stock for investors?

First cannabis, and now magic mushrooms? Investors will soon have a new drug to take bets on after Mind Medicine said it plans to list on Toronto’s NEO Exchange by the first week of March, Bloomberg News reports. The company - which counts former Canopy Growth co-chief executive officer Bruce Linton as a director and Shark Tank star Kevin O’Leary as an investor - aims to be the first publicly-listed neuro-pharmaceutical company developing psychedelic medicines. The company is close to preparing a Phase 2 clinical trial to investigate using a psychedelic drug called ibogaine to treat opioid addiction in the U.S.

New Mexico is hustling to become the 12th U.S. state to legalize recreational cannabis. Cannabis Now reports that while legislation has been introduced in both chambers of the statehouse, lawmakers are still trying to nail down the details before the current legislative session ends within the next month. Most opposition is coming from Republicans, the website reports, adding that there remains a “degree of sheer confusion in the proposed legislation.”

6.5
-- The number of months, on average, that large Canadian pot producers have left on their balance sheets, according to an analysis of cannabis investment bank Ello Capital. 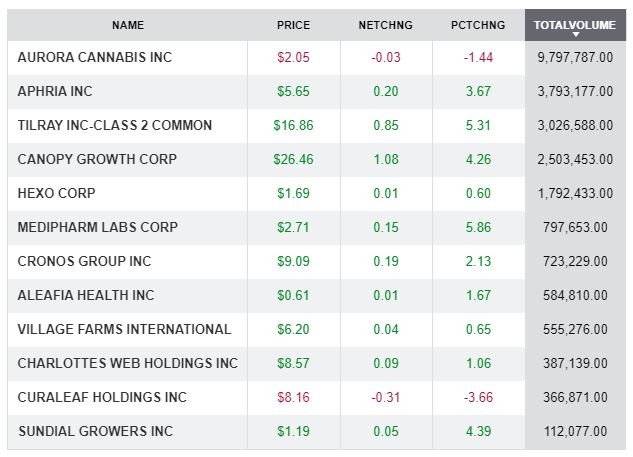