CannTrust Holdings said a second facility breached Health Canada regulations, marking yet another setback for the troubled Canadian pot company. Health Canada informed CannTrust late Friday that its manufacturing facility in Vaughan, Ont. broke several rules, including insufficient security controls and areas constructed without regulatory approval. CannTrust said in a statement it continues to work with Health Canada and will provide further details on a previously-implemented hold on the sale and shipments of its cannabis products as they become available.

Canopy Rivers has received conditional approval to graduate from the Toronto Venture Exchange. The venture capital arm of Canopy Growth said Monday it will list its class-A subordinated shares on the Toronto Stock Exchange after checking off certain customary requirements needed for final approval. Canopy Rivers President and CEO Narbe Alexandrian says the move will expose the company to a broader investor base and enhance liquidity. Canopy Rivers said it plans to delist from the Venture and start trading on the TSX under the ticker symbol “RIV” once it gets final approval from the exchange.

Sundial gets approval to expand production of Alberta facility

U.S. pot operator Acreage Holdings said it’s launching a number of new cannabis products in some markets as part of its “House of Brands” strategy, which is aimed at catering to different consumer segments. The new offerings will come from three brands – The Botanist, Natural Wonder, and Live Resin Project – all developed by New York-based Acreage, and will include products such as breath spray, vape cartridges, and CBD tinctures. Earlier this year, Canada’s largest cannabis producer Canopy Growth reached a deal to acquire Acreage for US$3.4 billion when it becomes legal to do so.

“For me, it’s a fairness issue.”
-- David Sharpe, CEO of Bridging Finance, a lender that is planning to fund cannabis stores on First Nations lands in Canada 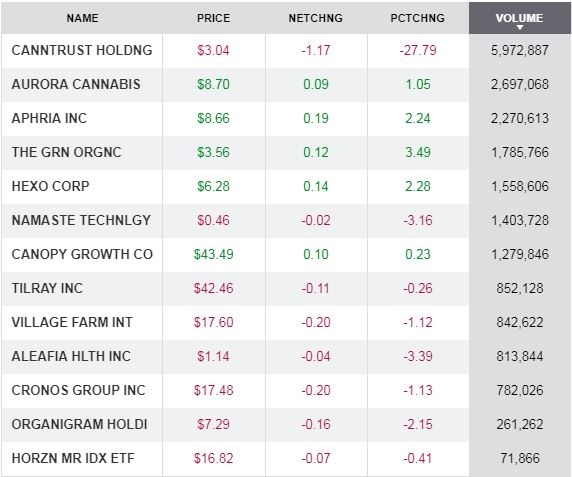