Beleaguered cannabis producer CannTrust announced Wednesday it hired Greenhill & Co. to explore a sale of the company after a regulatory breach led the company to fire its CEO and demand the resignation of its chairman. Greenhill will act as financial advisor to a special committee of CannTrust’s board, which will review potential alternatives including a sale, a strategic investment or a business combination, CannTrust said in a statement Wednesday. News of Greenhill’s appointment led to a surge in CannTrust shares on the Toronto Stock Exchange. BMO Capital Markets analyst Tamy Chen wrote in a report that if Health Canada revokes CannTrust’s licence to sell and produce cannabis, the company’s assets would likely be sold at a steep discount below current book value.

The interim CEO of CannTrust, Robert Marcovitch, told BNN Bloomberg’s David George-Cosh he’s “comfortable” that the beleaguered cannabis producer will return back to full compliance with Health Canada. Marcovitch – who has been on CannTrust’s board since January 2017 – stated the company found itself in a situation that was a result of “what I would like to believe was a few [people].” Marcovitch added that former CEO Peter Aceto’s termination with cause was a result of a “combination of matters that really we’ll rely on in future disclosures.”

Scotts Miracle-Gro is in the green. The gardening-products maker said its pot-focused Hawthorne Gardening subsidiary is helping to drive sales in its fiscal third quarter which has pushed its stock to record highs. Hawthorne, which supplies specialty fertilizers and hydroponics equipment used for growing cannabis, posted its third straight quarter of rising sales, the company said. Thanks to Hawthorne, Scotts is raising its outlook for its pot business, expecting a 90 per cent rise in sales, up from a June forecast of 80 per cent.

US$225 million
-- The size of the secured term loan that Harvest Health & Recreation secured from investment fund managers Torian Capital Partners. The funds will be earmarked for “working capital, strategic acquisitions and general corporate purposes.” 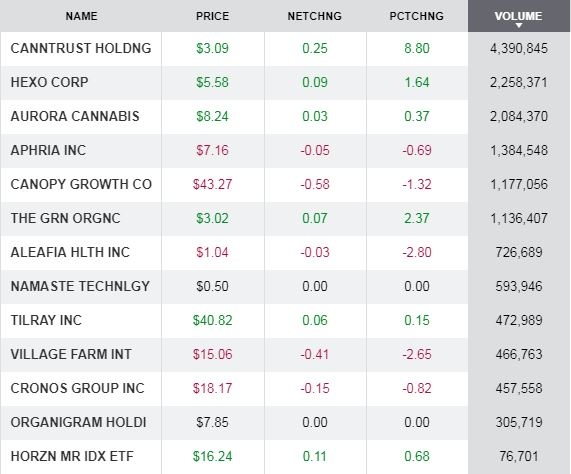