Canopy Growth Corp. has quietly launched its hemp-derived CBD brand, marking the pot giant's first official presence in the U.S. consumer market. Canopy's new product brand is dubbed "First & Free" and will be available for sale in the 31 U.S. states where CBD products are legal. Canopy's formal entry to the American CBD market comes shortly after the U.S. Food and Drug Administration’s statement last month that could not verify the cannabis compound’s safety in human or animal food products. Shortly after the FDA's statement, Jefferies LLC analyst Owen Bennett revised his forecast on the U.S. CBD market, pegging retail sales to reach US$3.5 billion by 2022. In addition to its current product lineup, Canopy expects to launch CBD products in skincare and cosmetics, vape products, beverages and edibles in the U.S. market, per financial documents released last month.

Wayland Group files for creditor protection; is in “advanced discussions” for new financing

Wayland Group, formerly known as Maricann, announced it filed for creditor protection late Monday. The company – which has had its  shares halted for the past four months - is the second cannabis firm to file for a court order under the Companies’ Creditors Arrangement Act, following Ascent Industries’ filing back in March. Wayland said in a statement that it is seeking creditor protection to receive a short term stay of proceedings to allow it to consider “potential financing arrangements and restructuring transactions.” It also noted it is in advanced discussions for debtor-in-possession financing. PricewaterhouseCoopers was appointed as the company’s court monitor and Wayland said it continues to delay filng its interim financial statements.

Shoppers Drug Mart’s medical cannabis business has gone national. The country’s largest pharmacy chain announced Tuesday that it added seven new provinces to its platform to serve residents in those areas who seek to fulfill medical cannabis prescriptions. Shoppers Drug Mart previously had a cannabis presence in Ontario and Alberta before expanding nationally. The company noted in a statement that, according to Statistics Canada, over 1.1 million Canadians use cannabis for medical purposes, but more than 800,000 patients are self-medicating with recreational or illegal cannabis without the guidance of a healthcare professional. Shoppers previously signed supply deals with 12 cannabis producers to provide its customers with medical cannabis

U.S. cannabis operator Harvest Health & Recreation announced Tuesday it added Ana Dutra and Eula Adams to the company’s board of directors, effective immediately. Dutra is the current CEO of Mandala Global Advisors, a global management consulting company while Adams is the CEO of Neuromonics Corporation, a global medical device company catering to those suffering from tinnitus. Meanwhile, Nanaimo, B.C.-based pot producer Tilray said Tuesday Katy Dickson will join the company as president of its Manitoba Harvest subsidiary. Dickson comes to Tilray from a prior role at toy maker Mattel, where she ran was in charge of the company’s American Girl doll business.

Brazil has given the green light to the sale of medical products derived from cannabis, the country’s health regulator announced on Tuesday. The regulator, known as Anvisa, provided how cannabis-derived medicinal products should be manufactured, imported, and sold in the country.  While Brazil still trails Uruguay and Argentina in terms of how cannabis is allowed to be cultivated and sold for medicinal purposes, it recently decriminalized the possession of marijuana for personal use. The new regulation will take effect in 90 days. The regulator also noted that cannabis companies should continue to provide assurances its products are effective and safe.

$55 million
-- The value of the “at-the-market” equity distribution agreement announced by Cresco Labs on Tuesday. The U.S. cannabis operator said it intends to use the proceeds to finance ongoing operations, repay debt and target future acquisitions. 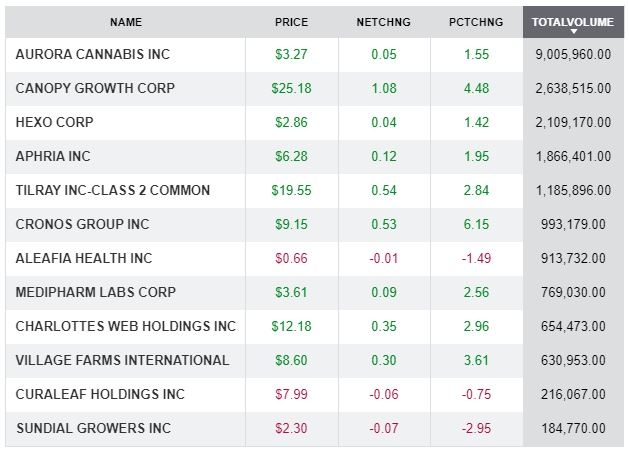