Canopy Growth has taken its CBD-infused beverage quest to the world of sports, acquiring a 72 per cent stake in BioSteel Sports Nutrition. While terms of the deal were not released, interim Canopy CEO Mark Zekulin said the two companies are already working together on new offerings. “This is an opportunity to take a proven product, one with scientific rigour and used by renowned names and athletes from around the world … and take that, layer in CBD and the pieces we bring, such as our war chest and a focus on scaled cannabis production,” Zekulin said in a phone interview. Sales of CBD-infused drinks are expected to rise to US$1.4 billion in 2023 from US$227 million this year, despite the U.S. Food and Drug Administration stating that CBD in food and drinks remains illegal. Talks between the two companies kicked off just over a year ago when Celenza met Canopy executives over drinks at a sports bar in Las Vegas.

One of Wall Street’s biggest custodian banks, the Bank of New York Mellon, sent its clients a note on Monday, updating its policy to stop accepting positions or trading with U.S. marijuana-related businesses. As of Nov. 30, the bank will no longer accept incoming positions or trading of non-permitted cannabis-related securities. However, the policy appears to allow Canadian pot companies not operating in the U.S. to be traded by the bank. After Nov. 30, the bank will no longer execute or clear new transactions in pot-related securities – or hold those securities in its role as a custodian bank – unless a client wishes to liquidate their positions in the companies under a grandfathered clause.

An Ontario appellate judge ruled on Wednesday to dismiss a motion by a group of disqualified cannabis store applicants requesting the province’s retail cannabis licensing process be suspended pending an appeal. The ruling will now see the application process to open 42 new cannabis stores in Ontario continue, although the proper roll-out of these new shops is expected to be delayed for some time. Ontario Court of Appeal Justice Ian Nordheimer ruled to dismiss the request after weighing the balance of convenience and determining the harm it would likely do to the public interest and the ongoing process that has already been well underway for sometime.

Cambridge, Mass.-based cannabis technology platform Tilt Holdings announced Tuesday that it has reached an agreement with six of its founders to forfeit more than 60 million stock options that were granted when the company was formed. The stock compensation cost reported by the company in the second quarter was US$48.9 meaning today’s announcement – valued at more than $47 million - brings the company close to the break-even point. “Tilt is fundamentally different today from just four months ago,” interim CEO Mark Scatterday – who assumed the role in May - said in a release. We still have work to do, but we are making great strides in just a small amount of time.”

– The private placement that Toronto-based TerrAscend said it intends to raise through the issuance of unsecured convertible debenture and common share purchase warrants. It already completed an initial tranche of US$10 million from Canopy Rivers, a previous investor in the firm. 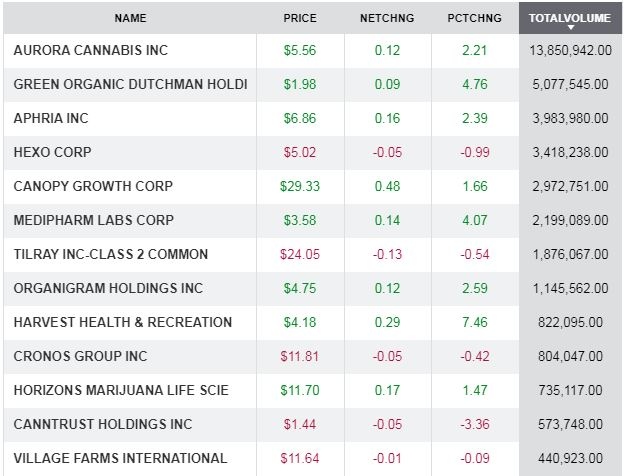