Canopy Growth to distribute pot-infused beverages in U.S. next year

Canopy to work with Acreage Holdings in distributing its pot drinks in the U.S. next year

Canopy Growth is getting ready to sell some of its cannabis-infused drinks south of the border. The Smiths Falls, Ont.-based pot giant said Thursday that it is working with Acreage Holdings to distribute its beverages in select U.S. markets sometime next year. The drinks will be initially available in Illinois and California, but the company didn't disclose which of its existing brands will be included. The company expects to sell the drinks first in dispensaries, with plans to get them into liquor stores or other retail locations once that becomes legally permissible. Since Canopy released its drinks to the Canadian market, it has sold more than 1.5 million beverages and controls about 70 per cent of the category. RBC Capital Markets analyst Douglas Miehm said pot drinks account for about 2 per cent of the U.S. legal cannabis market, but sees a likely expansion with the launch of new beverages from Canopy.

Shares of Auxly Cannabis climbed about 7 per cent higher on Thursday after the company announced it cut 43 jobs across its global operations. The staff cuts are expected to save the company about $3 million in quarterly administrative costs at its cultivation facilities in Uruguay and Nova Scotia. Auxly also announced a number of board changes, with Chuck Rifici stepping down as chair and being replaced by Genevieve Young. Former Logitech executive Vikram Bawa will also join the company's board, while Michael Lickver was promoted to president from a senior vice-president role. In addition to the job cuts, Auxly said it will look to "explore strategic alternatives" for some of its non-core assets to help it reach positive adjusted EBITDA. Desjardins analyst John Chu expects the company to reach that target sometime in the first half of its next fiscal year.

Shares of Toronto-based WeedMD plunged more than 12 per cent on Thursday after the company released its second-quarter results, reporting an $8.9-million loss. The company said its Q2 revenue came in around $5.9 million, down from the $8.0 million it generated in the same time a year earlier. WeedMD said in a statement that its revenue decline came from an "increased focus on higher margin direct-to-consumer revenue versus wholesale," while a portion of its losses came from a $1.3-million inventory writedown. 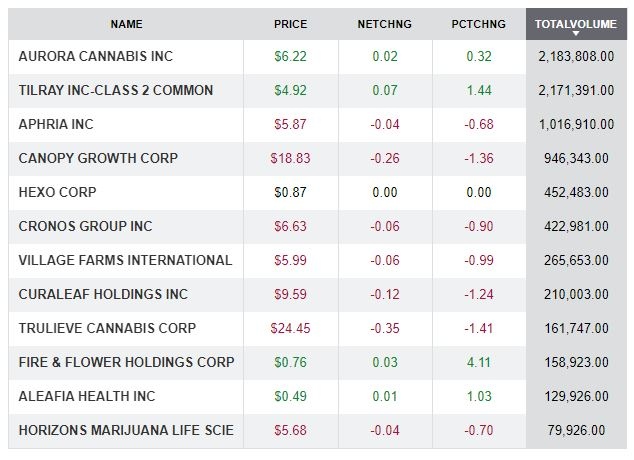