Canopy Growth said Friday it is pausing the rollout of its cannabis-infused drinks as the pot giant takes more time to complete the build-out of its bottling facility for commercial production. Canopy was set to release 13 new cannabis-infused drinks this month under its Tweed, Houseplant and Quatreau brands, but had only seven weeks to begin production after Health Canada amended the company’s licence at its beverage facility in Smiths Falls, Ont. Canopy said the delay is unlikely to have a material impact on its revenue for its 2020 financial year, which ends in March, and will provide an update on its drinks launch when it releases its third quarter results on Feb. 14. RBC Capital Markets analyst Douglas Miehm said in a report to clients on Friday that “certain engineering issues” related to infusing the THC solution into a beverage resulted in quality shortfalls leading to the delay.

The U.S. Centers for Disease Control and Prevention released a new report earlier this week stating that the recent outbreak of lung injuries tied to vaping products were caused exclusively by cannabis vapes—not nicotine e-cigarettes—most of which were purchased on the black market. The CDC said in its report that only one in six of the patients with the vaping-related lung injuries reported purchasing THC vapes from commercial sources. The Competitive Enterprise Institute, a non-profit public policy organization said the increasing evidence that cannabis—not nicotine—vapes were the cause of the illnesses did little to slow the march toward a new war on e-cigarettes. The outbreak led to a federal prohibition on all flavoured e-cigarettes (excluding only tobacco and menthol.)

Shares of Quebec-based cannabis producer Hexo plunged after the company announced it raised US$20 million in a registered direct offering on Friday. The company said it entered into an agreement with unnamed institutional investors to sell 11.9 million shares for US$1.67 each. A series of five-year warrants at an excise price of US$2.45 a share was also issued as part of the transaction. Hexo says the proceeds from the direct offering will go toward working capital and other general corporate purposes, including research and development and other “innovation strategies”. The direct offering comes less than a month after a prior deal announced on Boxing Day,  where Hexo raised US$25 million under similar terms.

U.S. cannabis operator Curaleaf provided an update to investors on Friday regarding several previously announced acquisitions. Curaleaf said its US$1.27 billion deal for Select is expected to close around Feb. 1 after completing the bulk of the requirements needed to complete (repetitive) the transaction aside from a licence transfer for Select’s Oregon business. Meanwhile, Curaleaf’s US$875 million deal for Grassroots is expected to close around Spring 2020 after the company submitted anti-trust documents to U.S. authorities. It also has filed paperwork to authorities in Massachusetts relating to its deal to buy Alternative Therapies Group, but didn’t provide a timeline on when it expects its deal to close.

The new U.S.-China trade deal has a small cannabis connection. China will be required to import an unspecified quantity of hemp from U.S. farmers after the commodity was cited as one of the agricultural products that the Asian nation agreed to import on a larger scale over the next two years, Marijuana Moment reports. Specifically, China will import “true hemp” which is a product that is “raw or processed but not spun; tow and waste of true hemp (including yarn waste and garnetted stock)”, according to the trade agreement, which was signed earlier this week. U.S. farmers are sitting on a glut of hemp after production far outstripped demand for the commodity despite significant consumer interest in CBD products. In 2018, the U.S. imported about $3.3 million in hemp from China, according to the Hemp Industry Daily.

$6.46
-- The price of a gram of cannabis in Canada, down 0.7 per cent from the prior week, according to the Cannabis Benchmark’s Canada Cannabis Spot Index. This equates to US$2,246 per pound at current exchange rates. 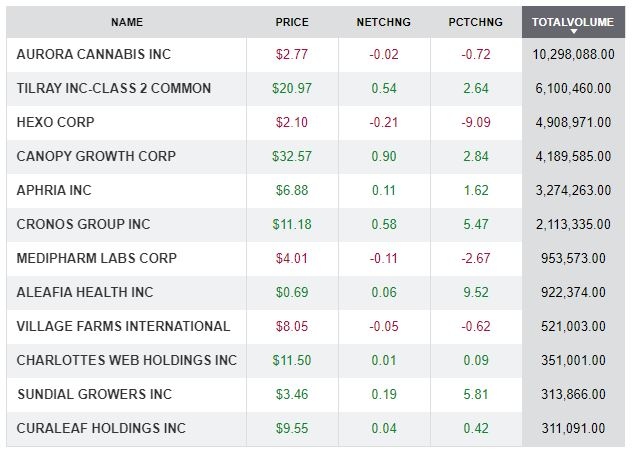