It turns out selling your cannabis for cheap is a novel way to win customers. Canada's cannabis industry has fully embraced the value segment of the market, which now represents about 40 per cent of all dried flower sales. The popularity of these “value" products has helped companies like Aurora Cannabis Inc. and Canopy Growth Corp. report better-than-expected quarterly sales figures, while also providing consumers with a competitively-priced product that could lure people away from the illicit market. However, cannabis companies may risk hurting their margins as well as sacrificing additional revenue by selling more cheap pot , despite being able to clear out inventory much faster, some analysts say.

Toronto-based cannabis venture firm Canopy Rivers reported its fiscal first-quarter results on Friday, posting about $2.6 million in operating income. The figure marked a slight improvement from the $2.1 million earned a year earlier. Canopy Rivers, in which pot giant Canopy Growth owns a minority stake, also reported a net loss of $3.5 million in the quarter, wider than the $2.9 million lost last year. The firm stated that its investments in such companies as High Beauty, LeafLink and PharmHouse saw a decline in equity value, while its TerrAscend, Vert Mirabel and Dynaleo stakes reported a net increase in fair value. Canopy Rivers also stated that its PharmHouse investment "may have insufficient liquidity and capital resources to achieve its business objectives." The company established a special committee aimed at overseeing strategic options for PharmHouse, which could include selling its investment.

Supreme Cannabis said it's ending its brand relationship with hip-hop star Wiz Khalifa, the company announced on Friday. Supreme and Khafifa first entered an agreement in Dec. 2018 to launch premium cannabis products under the KKE brand. Khalifa has been active in the cannabis industry since 2015, having released several premium strains under his Khalifa Kush Enterprises brand. Earlier this year, Supreme recorded a $12.6-million impairment for its product licence in regard to its agreement with KKE. The company said its planned KKE product line-up was impacted by Health Canada directives and market conditions.

Vancouver-based cannabis producer Zenabis reported a net loss of $15.7 million in its second-quarter, wider than the $2.9 million it lost a year earlier as it incurred charges related to its convertible debt. Zenabis also said it made $27.4 million in revenue in the three-month period, an improvement from the $19.9 million made in the prior quarter. The company forecast that revenue for its next quarter will come in the $22-26 million range, while recording adjusted EBITDA in the range of $4-6 million. Zenabis' shares plunged more than 18 per cent on the TSX Venture on Friday after the company released its quarterly report.

Beleaguered cannabis producer Sundial Growers issued its second-quarter financials late Thursday, stating it is in the middle of a "transition year." Meanwhile, the company's board initiated a strategic review of its operations. The review may result in a potential company sale, merger or other business combination, or disposal of some of Sundial's production assets, the company said in a statement. Sundial said it made $20.2 million in net revenue in the quarter, a five-per-cent improvement from last year, while posting a $31.5-million net loss. BMO Capital Markets analyst Tamy Chen said in a report Friday that Sundial's margins have been impacted by industry price competition and inventory management, a result of having too many producers in the cannabis market.

The Ontario Cannabis Store is expanding its delivery service to new regions in the province, and is now accepting orders from the Niagara Falls and St. Catharines area. With the expansion, the OCS is able to serve roughly two-thirds of the province’s population with direct-to-door delivery, the crown corporation told BNN Bloomberg. Since the OCS launched its delivery service in November, it has served 350,000 orders to customers across the province. At the onset of the COVID-19 lock-down period in March, the OCS' daily delivery service grew from 400 orders to 5,000 within two weeks, the firm told BNN Bloomberg in April. 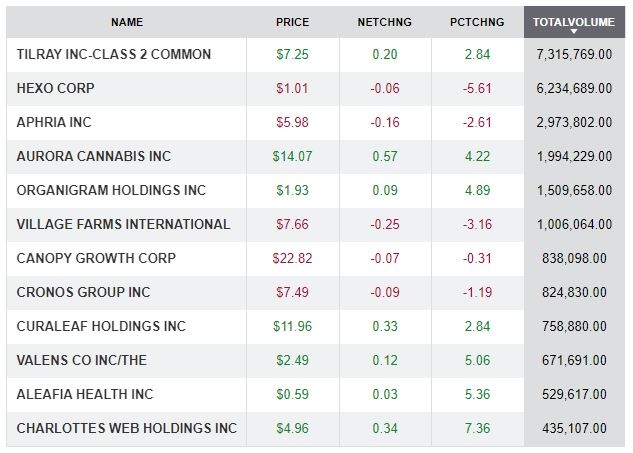