Beleaguered cannabis producer CannTrust Holdings said in a release late Tuesday that the Toronto Stock Exchange is reviewing whether the company will be eligible to list on the exchange. In a statement released late Tuesday, CannTrust said the review is a result of the Vaughan, Ont.-based company being in “arrears for satisfying certain disclosure requirements” after failing to file its amended financial statements for 2018 as well as the first three quarters of 2019. If CannTrust is unable to submit the updated statements by March 25, 2020, the company will be delisted from the TSX after 30 days. The company noted it does anticipate filing those new statements before March. CannTrust’s shares are down more than 85 per cent in the past year.

Toronto-based cannabis producer Flowr Corp. reported its third-quarter results late Tuesday, generating just $1.3 million in net revenue in the three-month period, while posting an adjusted EBITDA loss of $5.6 million. The company said revenues were impacted by construction of its indoor Kelowna facility as well as the timing of planting cannabis plants at its outdoor growing operation. Flowr said it grew 3,100 kilograms of cannabis in its outdoor facility, lower than the 10,000 kilograms it projected it could grow which it attributed to the delay in obtaining proper licensing. Flowr says it will be cash flow positive in the second half of 2020 as it looks to complete its Kelowna facility, an R&D building and its Portuguese operations.

Aurora Cannabis cut the ribbon on its flagship store in Edmonton’s West Edmonton Mall on Tuesday. The 11,000-square-foot retail store contains a section to purchase cannabis as well as an “immersive experiential space” where visitors can explore new products and take part in a rotating series of events. The store, which is believed to be Canada’s largest cannabis store, also contains special features such as a digital skylight and other tributes to the area’s mountains region. Cannabis retailer High Tide was selected by Aurora to manage the store and will provide various services including inventory, marketing, staffing, training, and security for a three-year period.

Canada’s entry for the Miss Universe pageant is looking to add a little buzz to her moment in the spotlight. The Windsor Star reports that Tecumseh, Ont.-native Alyssa Boston will be making a pitch for global marijuana legalization during the competition that takes place next month in Atlanta. Specifics on her actual pitch are said to be secret, but Boston recently visited one of Aphria’s greenhouses to better educate herself on the country’s legal cannabis industry. “It’s a brand new industry and there’s a lot of potential that we see in the future. I’m happy to bring awareness to it in a whole different light,” she told the newspaper.

Analysts remained bearish on MedMen Enterprises after the U.S. cannabis operator reported fiscal first quarter results late Tuesday. MedMen reported quarterly revenues of US$44 million, up 5 per cent sequentially while posting an adjusted EBITDA loss of US$22.2 million. Canaccord Genuity analyst Matt Bottomley reduced his price target on MedMen to $1 from $2 with concerns focused on the company’s balance sheet as it remains several quarters away from profitability. Meanwhile, Cowen & Co. analyst Vivien Azer said the company is “lacking lustre” for its operations outside from its California base, noting that sales outside of the Golden State were flat while its wholesale business sale revenues drop 17 per cent sequentially in the quarter. Cowen dropped its price target on MedMen to $0.40 a share from $0.85 while maintaining an underperform rating on its stock. 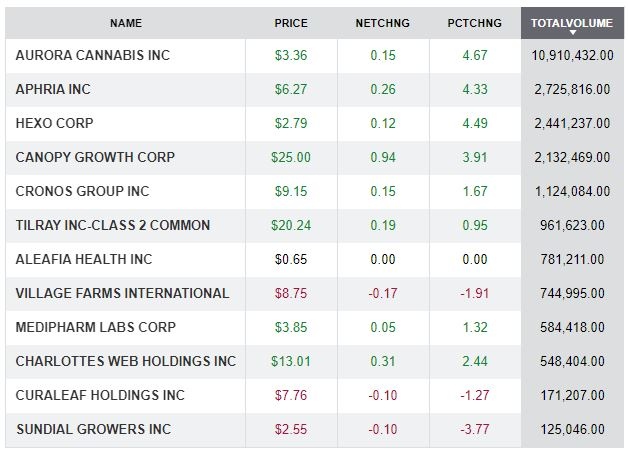