Canadian securities regulators are calling on companies in the cannabis industry to strengthen their governance and disclosure practices to ensure investors are aware of potential conflicts of interest for executives and directors relating to M&A activity. The staff notice issued Tuesday [PDF] by the Canadian Securities Administrators, an umbrella organization for provincial securities regulators, attempts to address a “higher-than-usual crossover” of potential conflicts of interest, such as overlapping debt and equity, in the sector’s M&A transactions over the past several years. The notice details how CSA staff have identified some deals where either the acquirer or acquiree had an undisclosed financial interest in the other entity, something that is deemed “material information” for investors. Other examples in need of improvement are when cannabis company executives or directors may have potential conflicts of interest that include personal or business relationships with other directors that could compromise their independence.

Shares of Moncton-based cannabis producer Organigram plunged on the Toronto Stock Exchange on Tuesday after the company unexpectedly issued preliminary fourth-quarter results a day earlier. The company now says it will report $16.3 million in net revenue for the quarter ended Aug. 31, down from $24.8 million in its prior quarter. The lower revenue is also expected to result in negative adjusted EBITDA (earnings before interest, tax, depreciation and amortization), ending a stretch of three consecutive periods of positive cash flow. Organigram attributes the decline in sales to a sluggish national retail rollout, specifically the “slower than expected store openings in Ontario” as well as “increased industry supply”. Jefferies analyst Owen Bennett says the fears of oversupply or price compression in the industry are “likely overdone” and remains bullish on Organigram’s prospects despite the “disappointing” update. The company will report its full results for its financial year on Nov. 25.

Toronto-based cannabis producer Cronos Group also missed analyst revenue and profit expectations after reporting its third-quarter results on Tuesday. Cronos reported $12.7 million in net revenue, up from $3.8 million a year earlier, while posting an adjusted EBITDA loss of $23.9 million compared with a loss of $3.2 million a year ago. Cronos also said it sold 3,142 kilograms of cannabis in Canada in the quarter, up from 514 kilograms in the third quarter last year and 1,584 kilograms in the second quarter of 2019. The company, however, is increasingly casting its future to the U.S. market, where it plans to soon launch a CBD product in 1,000 stores and leverage distribution from Altria, Cronos’ main backer. Cronos also plans to shift its accounting to U.S. GAAP reporting, from its current IFRS, and will report its financials in U.S. dollars in its next quarter. PI Financial analysts said with a $1.9 billion war chest of cash and investments, Cronos is one of a few companies that have the capital to fund its operations and future projects.

A day after announcing its outdoor pot harvest was one of the cheapest legal cannabis grown in Canada, Aleafia Health reported third-quarter results on Tuesday. The Toronto-based cannabis company said it made $5.29 million in net revenue in the quarter, up 34 per cent from the prior quarter while reporting $1.86 million in net revenue. With its outdoor harvest in the books, Aleafia now says it’s on pace to produce 129,500 kilograms of cannabis annually. The company now has nearly 10,300 medical patients that purchase its medical-grade cannabis, up 48 per cent from the prior quarter

Cannabis extraction company MediPharm Labs is now one of Canada’s biggest pot companies by revenue, after the Barrie, Ont.-based company said Tuesday third-quarter sales reached $43.4 million, an increase of 38 per cent from its prior quarter. That’s just below Canopy Growth and Aurora Cannabis in terms of revenue over a three-month period, according to Canaccord Genuity. MediPharm Labs also reported Q3 positive adjusted EBITDA of $10.1 million, up 31 per cent from its Q2, while highlighting its white-label manufacturing business. The company has agreements with Cronos Group and Ace Valley to ship formulated tincture bottles under their brands while also landing several bulk extract supply agreements. In a research note to clients on Tuesday, Canaccord said MediPharm’s expansion in Australia bodes well for further global prospects and is on track to surpass $100 million in revenue for the year.

“It’s like drinking from the fire hose.”
-- Steven Fry, co-founder of Sessions Cannabis, on opening a cannabis store in Hamilton within eight weeks after receiving his licence from the provincial government. 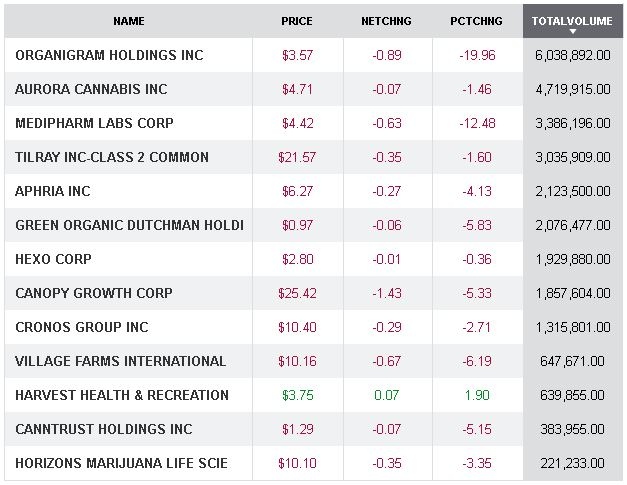