Toronto-based Aleafia Health notched its first quarter of positive adjusted EBITDA after reporting its fourth-quarter results on Wednesday. Aleafia said it made just $200,000 in positive adjusted EBITDA while reporting $6.03 million in revenue in the three-month period ending Dec. 31. The company slashed SG&A spending by 11 per cent to $4.3 million in the quarter while cannabis gross profit increased to $3.8 million. Aleafia currently sits on $41 million in cash, the company said in a statement.

Cronos to release Q4 results by March 30, restates revenue for two prior quarters

Cronos Group said late Tuesday that it plans to deliver its delayed fourth-quarter and annual results by March 30, while restating revenues in its two prior quarter. Cronos said it will reduce its Q1 2019 revenue by $2.5 million, while its Q3 revenue will be reduced by $5.1 million. It also said it will report “one or more material weakness in internal control over financial reporting” when it files its delayed annual report later this month. Jefferies analyst Owen Bennett said the restated revenue figures paint a “gloomy view of Cronos' underlying business”, but that the company’s $2 billion cash pile should be used to take advantage of lower valuations currently seen in the cannabis sector.

Fire & Flower to temporarily shut down seven stores, revert to pick-up for Ontario locations due to COVID-19

Cannabis retailer Fire & Flower Holdings is following behind Canopy Growth’s move to shut down some of its legal pot shops in an effort to stem the spread of the COVID-19 outbreak. Fire & Flower said it will close seven cannabis stores in Alberta while its stores in Ottawa and Kingston, Ont. will be able to pick up their purchases using a “click-and-collect” service. On Tuesday, Canopy announced it would temporarily close 23 cannabis stores it owns due to COVID-19. Inner Spirit Holdings, which operates Spiritleaf locations across Canada, will continue to open its doors, although it may reduce store hours, the company’s CEO Darren Bondar told BNN Bloomberg.

Embattled cannabis producer CannTrust Holdings said Wednesday it received an extension from the Toronto Stock Exchange whether it can continue listing on the stock market as well as being in arrears in satisfying certain disclosure requirements. CannTrust said it now has until April 16 for the TSX to determine whether the company should be delisted from the exchange. CannTrust also said it has $159 million in cash left on its balance sheet. 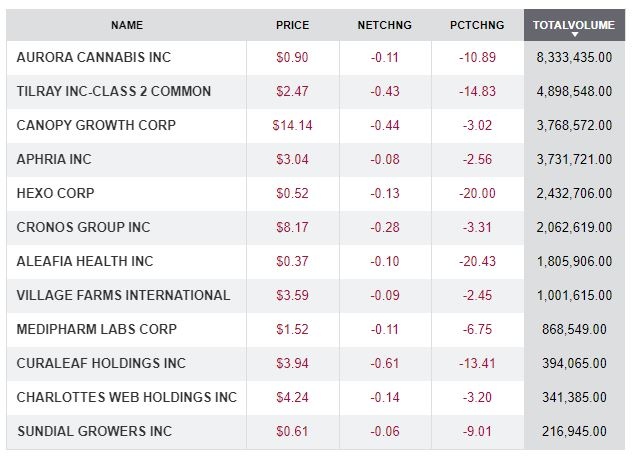