Aphria CEO Vic Neufeld and the pot producer’s vice president of growing operations Cole Cacciavillani will step down from their executive roles, but remain on its board of directors, the company said Friday. The departures come amid a turbulent time for one of Canada’s largest cannabis producers amidst a potential takeover offer and as questions over its acquisitions in Latin America remain unanswered. In its fiscal second-quarter ended Nov. 30, Aphria reported $21.7 million in revenue, up 63 per cent from the same period a year ago, but short of the $28.8 million that analysts expected.

Cannabis producer WeedMD is partnering with Pita Pit Canada in a new joint venture aimed at developing a pot retail presence across the country, marking the latest move by a Canadian restaurant chain to enter the burgeoning cannabis industry. The venture, dubbed Pioneer Cannabis, will open pot shops and assist entrepreneurs eager to open their own cannabis stores in provinces where privately-owned marijuana retail is allowed. The company will leverage Pita Pit's three decades of retail and franchise experience, as well as WeedMD's background in the cannabis industry to differentiate itself from already-established pot retailers.

Privateer Holdings, which own 76 per cent of the Tilray’s outstanding shares, said in a statement that it has no plans to register, sell or distribute its ownership stake in the first half of 2019 despite a lockup expiring for its subordinate voting shares next week. The statement from Privateer led to a 24 per cent rally on Friday that pulled US$76 million away from the stock’s short sellers, according to one research firm. The statement comes in the wake of a fresh surge in the cost to finance a new short position in Tilray, which hit a high of 900 per cent on Wednesday.

The Consumer Electronics Show, the world's largest consumer electronics convention, is apparently shunning cannabis-related tech in its latest expo this year. According to Mashable, companies are grumbling that organizers are not allowing cannabis firms that offer new tech solutions for consuming the drug to participate in the show. Missing out on CES could be devastating to pot-centered tech companies, which would miss out on exposure and backroom deals that typically take place during such an event.

All you need is “$75 and a pulse”
– Chad Finkelstein, partner of Dale & Lessmann LLP, on how easy it is for people to apply for one of Ontario’s 25 cannabis retail store licenses. The lottery to determine the winners of the licences takes place Friday. 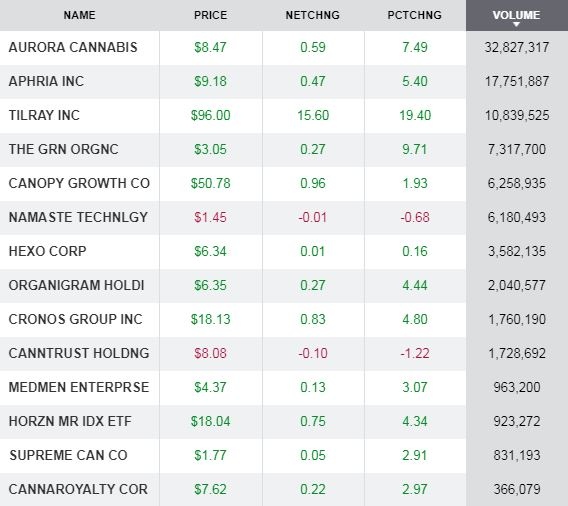