Only three days after it announced a supply deal with Mexico’s Farmacias Magistrales, Aurora Cannabis decided to just buy the company outright. Aurora’s all-stock deal for Farmacias Magistrales gives the Canadian company a first-mover advantage in the world’s biggest market for legal medical cannabis as well as a base to expand the Canadian company’s regional strategy in Central and South America. Aurora will provide Farmacias with “derivative” cannabis products which include any refined items such as oils, capsules, tinctures, and other THC and CBD concentrates for Mexico’s medical market. The coutnry prohibits the cultivation, import, and sale of dried cannabis flower.

Canada’s biggest retailer now provides medical cannabis. Although it’s been known for months, Loblaw Co. Ltd.’s Shoppers Drug Mart pharmacy has been granted a licence to sell medical marijuana online. The licence was awarded on Friday when Health Canada's list of authorized cannabis sellers and producers was updated to reflect that the pharmacy can sell dried and fresh cannabis. The company was granted a medical marijuana producer licence in September, after initially applying in October 2016.

Future of tobacco farming may be found in cannabis

U.S. tobacco farmers, beset by declining smoking rates, may see their future in cannabis. Bloomberg’s Kristine Owram reports that Cronos Group might follow alongside its new investor Altria in cultivating cannabis through contract work with farmers rather than by growing it themselves. Cronos CEO Mike Gorenstein says the company wants to help farmers transition immediately into cannabis cultivation, a strategy that other pot producers like CannTrust have already explored for several months.

As Ontario mulls the launch of legal cannabis retail stores next year, the mayor of its biggest city wants the province to cede more power on where the pot shops should be located. Toronto Mayor John Tory said he wants more distance to be placed between schools and retailers selling legal cannabis. According to Ontario’s guidelines, pot shops should be placed 150 metres away from schools and bar entry to anyone under 19 years old. Brick-and-mortar cannabis retail stores are expected to open across Ontario on April 1, 2019.

US$96 million
- The amount of medical marijuana sales in Maryland during the first year that medical-grade cannabis was made available in the U.S. state. 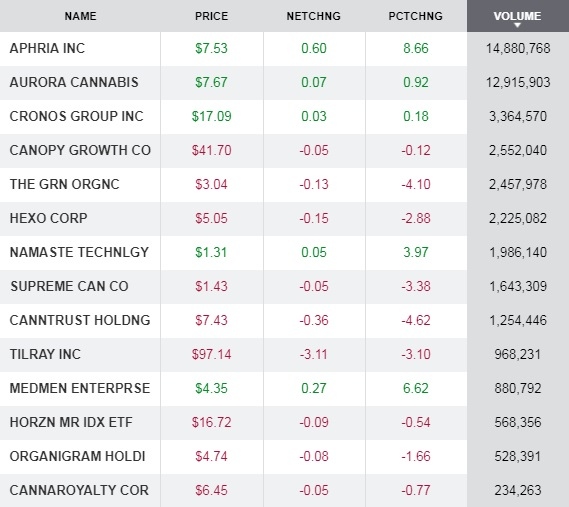