Canada may be the first developed country to legalize marijuana, but the country has been left in the dust when it comes to developing a robust cannabis startup scene, according to data from Refinitiv. Of the 125 venture and private equity investments made in the cannabis sector globally from 2013 to the second quarter of this year, 97 of the deals were in U.S. companies, the data revealed. Several venture capital firms told BNN Bloomberg that investments in Canadian pot startups will likely continue to lag behind their American counterparts, where “capital-starved” firms appear to offer a more favourable growth opportunity.

U.S. cannabis company Ayr Strategies will make its stock-market debut on Toronto's NEO Exchange under the symbol "AYR" on Monday. Ayr’s Chief Executive Jonathan Sandelman was previously president at Bank of America Securities, while Chief Operating Officer Jennifer Drake was a managing director at Goldman Sachs. Arya reported EBITDA of about $30 million in 2018. The stock is set to begin trading with a market value of about $935 million, making it the second-largest U.S.-focused pot firm to list on the NEO.

Zenabis to debut on TSX on Monday

Canadian cannabis producer Zenabis Global said it has received final approval to list on the Toronto Stock Exchange. The B.C.-based company will make its TSX debut Monday, with common shares trading under its current symbol “ZENA.” At the same time, Zenabis will be voluntarily delisted from the TSX Venture Exchange. CEO Andrew Grieve said in a release the milestone will open the door to a broader range of investors and provide the pot firm improved liquidity.

Shares in Aphria rose Friday after investment bank Jefferies Group initiated coverage of the Leamington, Ont.-based pot producer with a buy and price target of $15 per share. “Our 10-year [discounted cash flow]-driven valuation suggests a big disconnect between the share price and the outlook,” Jefferies analyst Owen Bennett wrote in a note to clients. “Despite its strong global outlook, its valuation is the cheapest across our space, with allegations around inflated assets/insider deals weighing.” Bennett said that with “these issues now seemingly cleared up” and potential for positive developments in the U.S., Aphria shares will likely experience a significant re-rating ahead. 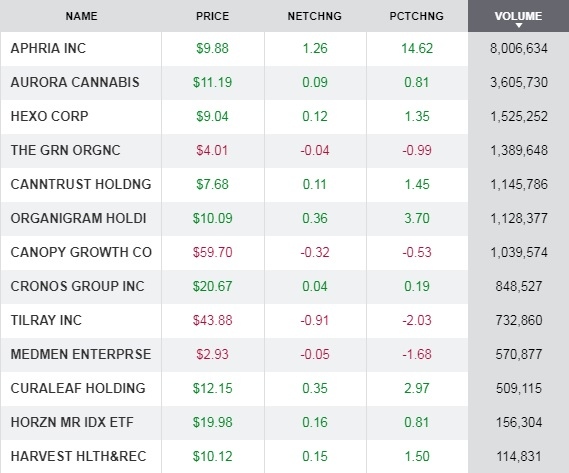