Canopy Growth’s deal to acquire the right to eventually buy U.S. pot operator Acreage Holdings for US$3.4 billion may be the first such deal involving a Canadian cannabis company, but it likely won’t be the last. That’s according to Canopy’s CEO Bruce Linton who told BNN Bloomberg on Tuesday that now that the company wrote the playbook on how to enter the U.S., other companies will likely make similar moves to enter the world’s biggest cannabis market. “I expect others will follow,” Linton said. “It’ll probably be more costly. It’ll bring different players other than cannabis players, but I like moving first.” Canadian-listed pot companies are restricted on owning or operating any U.S. assets as they must comply with all the laws and regulations in the jurisdictions in which they operate.

Now that Canopy found its U.S. dance partner, Acreage Holdings says it intends to use its Canadian connection to start accelerating a cannabis land grab south of the border. Acreage will soon be able to issue up to 58 million subordinate voting shares at an implied valuation of US$1.4 billion based on the deal’s exchange ratio with Canopy shares. The move will give Acreage an enormous advantage over many of its U.S.-focused cannabis competitors. “This transaction should boost Acreage’s ability to consolidate the U.S. market,” GMP Securities analyst Martin Landry wrote in a note published Monday. “When Canopy officially takes ownership of Acreage, it could be much larger than currently.”.

The first few months of recreational cannabis appear to have overwhelmed Canadian pot producers who struggled with depleted inventory levels and a rush to grow more legal pot this year. BMO Capital Markets took a look at the latest Health Canada figures and observed a significant decline in the sale of recreational pot during the first two months of the first quarter of 2019 compared to the similar time frame at the fourth quarter of 2018 when Canada first legalized cannabis. The BMO analysts concluded that pot producers “would have notably depleted their accumulated inventory” and now are rushing to replenish finished product inventory. The findings come after analysts recently reduced their revenue forecasts for several Canadian cannabis companies amid concerns that most licensed producers are experiencing softer sales as they ramp up cultivation and supply chain processes.

Not surprisingly, April 20 was big day for business at cannabis dispensaries. The day, known widely as an unofficial pot holiday, was celebrated across North America, including a massive rally in Vancouver where tens of thousands of people took part in the annual smoke-in. Meanwhile, Canadian retailer High Tide said it made $441,000 in systemwide gross revenues from April 19 to 21 across its 26 pot shops across the country, up 234 per cent from the same period a year ago. In the U.S., Planet 13, operator of the biggest pot dispensary in the country, reported April 20 was the single biggest shopping day since the store opened last year, with about 3,500 people spent an average of US$91.11, equating to roughly US$280,000 in revenue. 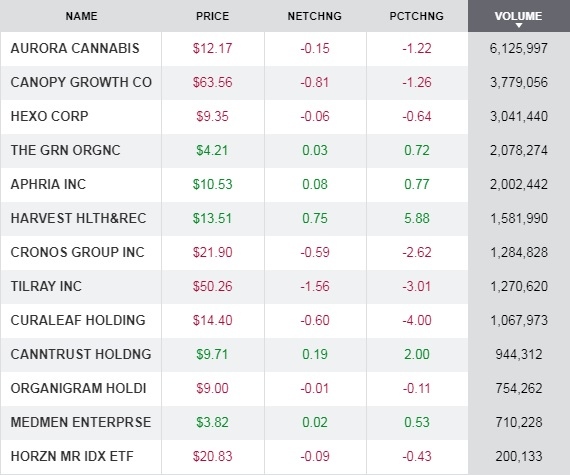