Dollinger back at Namaste in advisory role, withdraws legal action

Sean Dollinger is back at Namaste. Well, kind of. Namaste’s former CEO said he will return to the Toronto-based cannabis e-commerce firm as a senior advisor after reaching a settlement with the company. Earlier this month Namaste said it would commence legal action against the co-founder after an internal investigation identified alleged breaches of fiduciary duty and self-dealing related to the sale of its U.S. division. Dollinger countersued, commencing legal action of his own against Namaste to stop his termination unless a “proper process” was followed. On Tuesday, however, Namaste said in a release that Dollinger has withdrawn the legal action and that interim CEO Meni Morim will remain at the helm of the company.

It was a big day for cannabis retail chain Fire & Flower. The company went public on the TSX Venture Exchange on Tuesday with its shares trading as low as $1.15 after opening at $1.49. Meanwhile, the retailer announced it secured agreements with two winners of the Ontario pot shop lottery to open stores in the province’s eastern region, which is still undergoing an eligibility review phase. Fire & Flower currently operates seven cannabis retail stores in Alberta, two cannabis retail stores in Saskatchewan, and a wholesale cannabis supply business in Saskatchewan.

North American cannabis producer MJardin Group has appointed Adrian Montgomery as the company’s new chairman and interim CEO to replace outgoing CEO Rishi Gautam. Montgomery comes to the company after stints at Tuckamore Capital Management, a Canadian private equity firm, the Aquilini Group – owner of the NHL’s Vancouver Canucks – and Rogers Media. MJardin also provided an update on its growth plans, stating it is on track to produce more than of 31,000 kilograms of cannabis per year by 2020.

South Korea will be the latest Asian country to allow imports of medical cannabis, according to the country’s ministry of food and drug safety. Starting on March 12, South Korea will allow imports and exports of non-hallucinogenic doses of medical marijuana for patients suffering from epilepsy and other diseases. Despite the loosening of the country’s cannabis regulations, smoking and trafficking marijuana for recreational use remains illegal with those found guilty facing upwards of five years in prison.

“A lot of people are making money but they’re not willing to actually do the research.”
– Dr. Yasmin Hurd, director of the Addiction Institute at Mount Sinai, who has studied the cannabis compound CBD for about a decade, on the lack of research for the drug 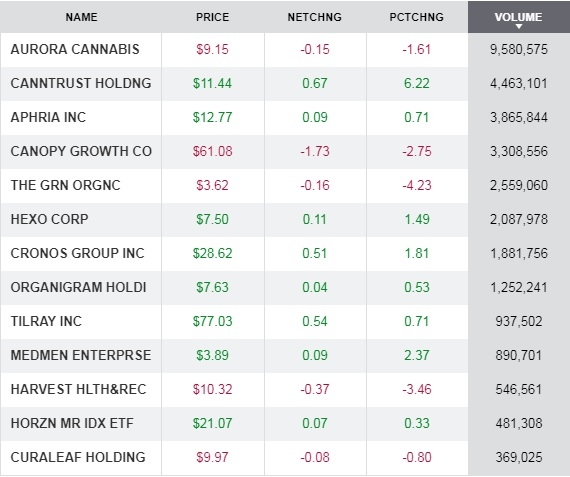