Amid a stock plunge that saw Canopy Growth shares plunge by about 50 per cent since pot became legal in Canada, the company’s co-CEO Bruce Linton said he’s focusing on winning the support of institutional investors to help stabilize its shares. Linton, who spoke to BNN Bloomberg Tuesday, said the post-legalization share price erosion last year “kicks me in the butt to keep working at more institutional investors.” Linton added that Canopy’s expansion in New York to develop industrial hemp products gives it a strong position to process cannabis federally in the U.S., when it becomes legal.

Nanaimo, B.C.-based pot producer Tilray has teamed up with Authentic Brands Group, the U.S. company behind brands such as Juicy Couture, Aeropostale and Nine West,  to develop and sell co-branded consumer cannabis products globally. Tilray will initially pay US$100 million in cash and stock, or up to $250 million, depending on certain milestones as part of the 10-year deal. The agreement comes as the company’s post-IPO lockup period ends, allowing insiders to sell shares on the open market, leading its stock to fall as much as 14 per cent on the Nasdaq.

As more U.S. cannabis companies look to bolster their CBD portfolio amid the newly-legal industrial hemp U.S. market, Charlotte's Web Holdings said its 2018 harvested hemp will be 10 times more than what it produced during its 2017 growing season. Charlotte's Web planted 300 acres of hemp in 2018, up from 70 acres in 2017, and expects to produce about 675,000 lbs of hemp.

U.S. attorney general nominee Bill Barr said he would "not go after" marijuana companies in states where cannabis is legal during his confirmation hearing on Tuesday. The comments come after former U.S. Attorney General Jeff Sessions rescinded guidance made during the Obama administration that kept federal authorities from cracking down on the pot trade in states where the drug is legal. Current U.S. federal law prohibits the possession and sale of marijuana, although it’s legal either recreationally or medically in dozens of U.S. states.

$1.6 billion
– How much Canadians spent on legal medical and recreational cannabis in 2018, according to Arcview Market Research. 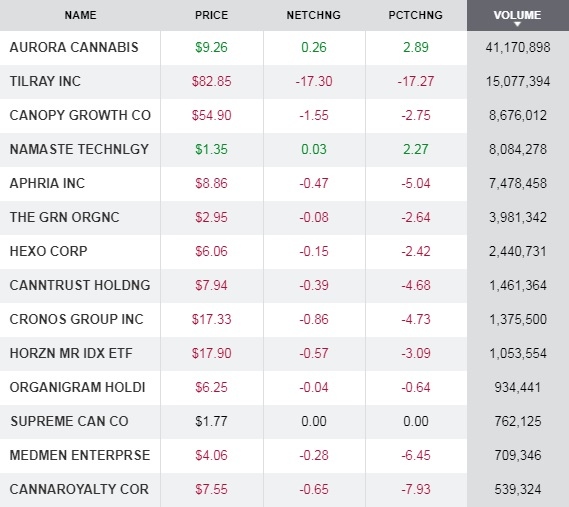