Sales of legal dried cannabis in January were down from December, the first such monthly decrease since recreational use of marijuana was legalized last year, Health Canada said. The country’s pot regulator said late Wednesday that 7,115 kilograms of dried flower cannabis was sold in Canada in January, down 3.7 per cent from December, according to its monthly Cannabis tracking system. Overall sales of legal dried cannabis were up 10.9 per cent since October. While Health Canada didn’t disclose why sales of cannabis declined in January, the marijuana industry has been hit by a number of issues which have plagued the launch of legal pot, including logistical issues, a mixed retail rollout, and a robust illicit market.

O’Rourke urges full legalization of marijuana in the U.S. on first day of presidential campaigning

Democrat Beto O’Rourke, who recently announced he’s running for U.S. President in 2020, said he supports full legalization of marijuana in the U.S., while also calling for stigmatizing the drug like tobacco to discourage children from using it. The former Texas congressman said at a campaign event in Iowa Thursday that as marijuana use has increased, tobacco use has “plummeted” in the last 40 years as it has been treated as a public health issue and marketed as “not cool,” Bloomberg reported. A key reason to legalize pot would be to reduce the number of people of colour jailed on drug offences, O’Rourke said.

Former boxing heavyweight champion Mike Tyson and Planet 13 are partnering up to launch Tyson Ranch products in Nevada. Tyson will make marketing appearances at the company’s cannabis “superstore” - the biggest pot dispensary in the world - according to a release. “Iron Mike” broke ground in December on a 40-acre ranch to be located in California City, about two hours north of L.A. where it will host an area for cannabis cultivation and an “edibles factory.”  Tyson Ranch products will be available at the Planet 13 Las Vegas store next month.

A day after announcing a deal to purchase Tragically Hip-affiliated cannabis producer Newstrike Brands, Hexo reported a loss of $4.3 million in its latest quarter. The loss comes as revenue grew to $16.2 million in its first full quarter following the legalization of recreational cannabis in Canada. The result compares with a loss of nearly $9 million or 10 cents per share in the same quarter a year earlier, with the company reporting $1.2 million in revenue at the time. Hexo CEO Sebastien St-Louis said the industry-wide issue of lower-than-expected sales in the first few months of legal pot is a result of underestimating the infrastructure needed to fulfill orders.

“As we start to develop this, people are really looking at us, so I know that everybody wants to get it right.”
- Cary Carrigan, executive director of the Alaska Marijuana Industry Association, becoming the first U.S. state to allow onsite use of marijuana at specially authorized stores. 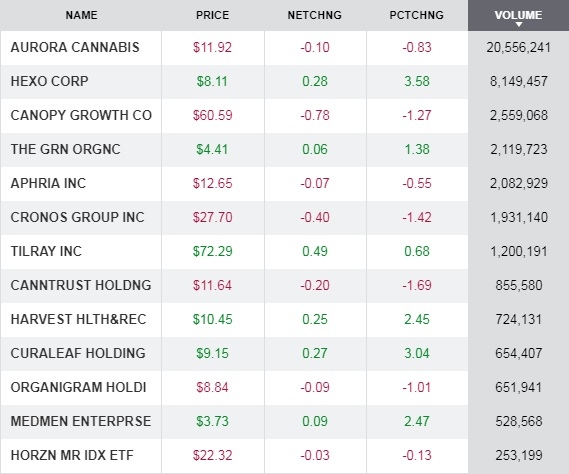