Cannabis edibles and alternative products expected to be worth nearly $3B: Deloitte

The upcoming cannabis edibles and alternative products category is forecast to be big business in Canada, according to a new report from Deloitte. Deloitte sees the Canadian market for next-generation cannabis products worth an estimated $2.7 billion annually, with edibles contributing more than half. Canada is gearing up to legalize cannabis-infused foods, beverages, topicals and other next-generation products in the coming months and while a formal date has yet to be set, regulations must be in place no later than Oct. 17, 2019. Deloitte estimates that roughly $1.6 billion will be spent on edibles in Canada, followed by cannabis-infused beverages at $529 million and topicals at $174 million. The global market for alternative cannabis products is expected to nearly double over the next five years, the consultancy added.

Napa Valley might be synonymous with wine – but it could see its future as a potential hotbed for cannabis cultivation. The San Francisco Chronicle reports that a group called the Napa Valley Cannabis Association is looking to add cannabis cultivation on an upcoming ballot in the region after Napa officials banned pot farming several years ago. The initiative would tax cannabis growers, to the order of $1 to $2 per square foot and limit marijuana growing to one acre per business. Opponents of the plan say there isn’t room for another cash crop and are worried cannabis would contaminate vineyards, strain an already-tight farm labor force and detract from wine sales, the Chronicle reports.

Senior executives and board members from cannabis company Tilt Holdings received US$60-million, mostly in stock options, despite the company taking a nearly US$500-million writedown last month. The Globe and Mail reports that weeks after Tilt wrote down the outsized charge based on goodwill impairments, the company  paid “key management personnel” US$59.3-million in stock compensation in a single quarter, as well as US$0.9-million in cash compensation. Tilt attributed the compensation to stock options awarded to founders when the company was formed through a four-way merger in late 2018 as well as additional options issued to new executives who were brought on board. Tilt has just US$12 million in cash remaining and in April, secured a US$20-million credit facility that charges an effective interest rate of 18.75 per cent.

65 million
- The amount of Americans who have tried CBD products, according to a speaker from Consumer Reports during last week’s U.S. Food and Drug Administration hearing on the cannabis compound. Of that total, 63 per cent of CBD users found taking the non-intoxicating compound “effective”. 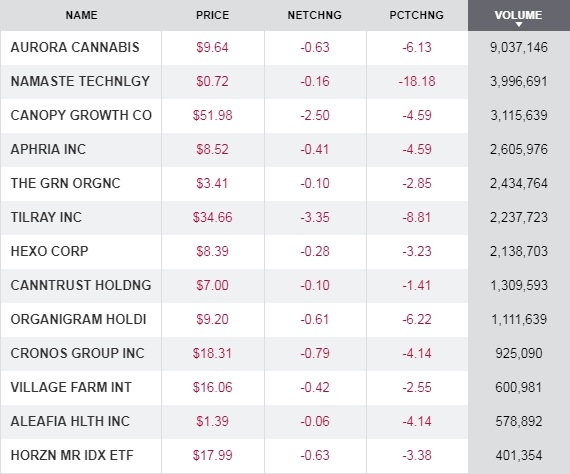