Green Growth Brands formally announced its takeover bid for Aphria late Tuesday, offering 1.5714 of its shares for each share of the beleaguered Leamington, Ont.-based cannabis producer. The bid is the same exchange ratio presented in late December when the company announced its intent to make an offer for Aphria, but will not be adjusted to account for changes in its stock price. Aphria Chair Irwin Simon said it will review Green Growth’s offer, but added in a statement the company’s leadership is “determined to protect Aphria shareholders from opportunistic offers that fail to reflect the substantial value.”

While the exchange ratio that Green Growth Brands is presenting to Aphria remains unchanged from its December statement announcing its intent to pursue a takeover bid for the company, its latest press release and lengthy circular include many new details. Some of these include pulling the plug on the deal if any information highlighted in the short-sellers’ report released last month is corroborated, the $150-million investment into Green Growth's shares by All Js Greenspace LLC, a holding company connected to the Schottenstein family, and the lack of specific Aphria shareholder support it has. The company previously stated it had the backing of about 10 per cent of Aphria’s shareholders.

Canadians bought $54 million of marijuana from stores in the first full month after sales were legalized, according to Statistics Canada. That’s up about 26 per cent, or $43 million, from the first two weeks following legalization on Oct. 17. Analysts expect the Canadian cannabis market to be worth between $5.5 billion and $10 billion a year, according to Bloomberg. Still, Statistics Canada’s numbers may understate the rough rollout of legal pot in the country following an ongoing supply shortage, reduction in nationwide retail operations and limited product offerings. Quebec, for example, has reduced the number of pot stores it plans to have open by March 2020 to 40 points of sale from its original plan of 50.

More than half of Ontario's eligible municipalities have opted in to allow cannabis shops to open their doors in Canada’s most populous province, according to the Alcohol and Gaming Commission of Ontario. So far 248 municipalities are listed as opting in to allowing pot shops in their jurisdiction, while 71 have opted out and the remaining 95 are listed as unknown. Ontario awarded 25 cannabis retail licences earlier this month following a lottery system allowing winners to apply to open stores in April.

Philippines moved slightly closer to permitting sales of medical marijuana after its parliament approved on second reading a bill legalizing and regulating the use of medical cannabis in the Asian country. The proposed bill would allow patients to acquire medical cannabis under a prescription and also establish a Medical Cannabis Compassionate Center licensed by the country’s health department “to acquire, possess, manufacture and sell cannabis to registered qualifying patients.” 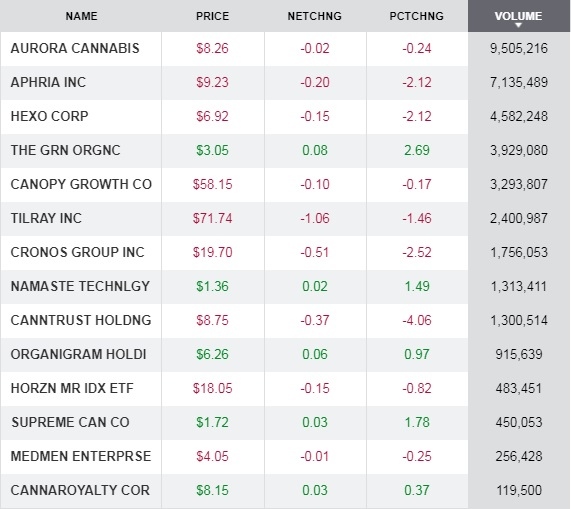