Ontario’s government lost $42 million selling cannabis in its last fiscal year, according to provincial public accounts released on Friday. The losses come despite the Ontario Cannabis Retail Corporation, a crown corporation that operates the Ontario Cannabis Store’s online retail business and sells wholesale cannabis to the province's private retail stores, generating $64 million in the fiscal 2018-2019 year. An OCS spokesperson said the agency wasn’t able to book wholesale revenue from selling into the first wave of physical retail stores in the latest fiscal year, which hurt the crown corporation’s bottom line. Meanwhile, the Ontario government said Friday it generated $19 million in revenue from cannabis excise taxes in its last fiscal year, falling well short of the $35-million estimate presented in the most recent provincial budget.

Canopy Growth’s deal to acquire cannabis researcher Ebbu Inc. last October was centered on the company’s vast array of intellectual property. However, Ebbu has struggled to get its IP converted into patents after one of its first applications has been rejected by the U.S. Patent and Trademark Office three separate times. Bloomberg reports the difficulties Ebbu faced in securing patents point to a broader issue in the pot sector, where many companies tout their intellectual property but few have successfully obtained exclusive rights to their inventions. A spokesperson for Canopy, which eventually paid $429 million for Ebbu factoring in the condition of how the Canadian company’s shares traded after the deal was announced, acknowledged Ebbu’s patent applications remain in flux but it also was attracted to the firm for its “R&D advancements and capabilities and how they complemented our own.”

The drum beat of cannabis legalization in the U.S. continues as a bipartisan bill to protect banks that service marijuana businesses is due to be introduced in the U.S. House of Representatives this month. Marijuana Moment reports that House Majority Leader Steny Hoyer will hold a vote in favor of the Secure and Fair Enforcement (SAFE) Banking Act during the last week of September. The upcoming vote comes as the Senate Banking Committee is preparing a marijuana-focused banking bill of their own, although a timeline isn’t apparent, the news site reports.

If you’re expecting another round of pot stores to open in Ontario, you might have to wait a little bit longer after a provincial judge suspended the province’s regulator from issuing any new pot shop licences for two weeks. Justice David Corbett said he will rule on Sept. 25 whether 11 disqualified cannabis retail lottery winners should resume the application process for a coveted pot shop licence in Ontario or let people on a waiting list take their place. Lawyers representing some of the applicants previously on a waiting list and now in line to apply for a licence argued to stay the entire application process to "ensure the integrity of the process." The disqualified applicants’ main argument centres on whether they breached a rule that they needed to provide a $50,000 letter of credit within five days of being notified that they had won one of the 42 spots to apply for a pot shop licence.

Curaleaf gets approval for five new pot shops in Massachusetts

U.S. cannabis multi-state operator Curaleaf said it was granted approval for its three final and two provisional adult-use licenses to open pot stores in Massachusetts. Further inspections need to be completed in order for the stores to be allowed to open its doors, a process the company expects to be completed in the coming months. GMP analyst Robert Fagan viewed the announcement as a “definite positive” development which should see the company begin to book revenue in the fourth-quarter of the year. Fagan estimated Curaleaf could generate between US$95 million to US$120 million in revenue for its Massachusetts stores.

Legalizing cannabis could be one solution amid recent vaping-related health scare: lobby group

There could be a silver lining amid the rash of vaping-related illnesses being reported across the U.S. The National Cannabis Industry Association, a lobby group, is calling on the U.S. Congress to remove cannabis from the U.S.’s “Controlled Substances Act” and regulate marijuana in a manner similar to alcohol and other regulated products. That would allow U.S. officials to properly regulate how cannabis-infused vape cartridges could be manufactured and sold, rather than allowing the black market to essentially self-regulate itself. More than 400 people have reported illnesses and at least six deaths have been tied to vaping, according to the U.S. Center of Disease Control, many of which have been linked to an additive in cannabis vape cartridges.

$7.22
-- The price of a gram of cannabis in Canada, up 6.3 per cent from the prior week, according to the Cannabis Benchmark’s Canada Cannabis Spot Index. This equates to US$2,479 per pound at current exchange rates. 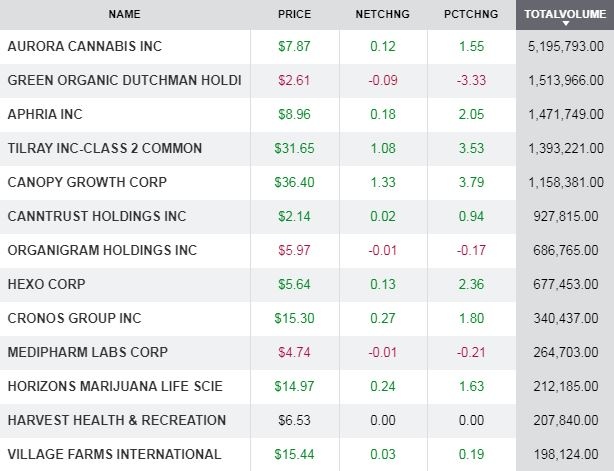