Canadians are paying nearly 50 per cent more for legal cannabis compared to illegal sources, according to an analysis of price quotes by Canada’s national statistics agency. Statistics Canada found that the average price paid for dried cannabis from legal suppliers was $9.70 a gram. That was 49 per cent more than the average price for a gram of dried cannabis purchased from illegal suppliers of $6.51. The price of cannabis in Canada is expected to fall in the coming years, mirroring similar moves in U.S. states where pot is legal, as more supply comes online and licensed producers compete with the black market.

Shares of Constellation Brands plunged about 10 per cent Wednesday, the most since 2013, after the alcohol giant cut its profit outlook and signaled slowing growth in its beer business. In its latest earnings report, Constellation said it expects a decline in profit and sales from its wine and spirits business for the current fiscal year, as well as higher interest expenses from its $5-billion investment in Canopy Growth. Meanwhile, Canopy’s shares shot up as much as 12 per cent Wednesday after Piper Jaffray initiated coverage on the Canadian cannabis company with an overweight rating and US$40 price target on the company’s stock.

Alberta’s move to suspend new licenses for cannabis retail stores could cost $13 million in lost leases and up to 1,800 lost jobs, according to a study by the Alberta Cannabis Collective. Alberta’s cannabis regulator suspended issuing store licences in November to better manage a reduced supply of legal pot across the country. The province has approved 65 cannabis stores throughout Alberta. Meanwhile, Ontario ended its three-day application window on Wednesday to participate in a closely-watched lottery that will determine who will be awarded 25 licenses to open up pot shops in the province.

A former MedMen board member and a major shareholder are suing the U.S.-based cannabis retailer and pot producer for alleged breaches of fiduciary duty, including several allegations of self-dealing from the company’s senior executives. Brent Cox, who served on MedMen’s board from March 2016 to March 2018, and Omar Mangalji, who holds about a 10 per cent stake in MedMen’s management company, filed a lawsuit detailing their complaint at the Superior Court of Los Angeles in Santa Monica on Wednesday. MedMen representatives have not responded for comment to the lawsuit’s allegations.

126 hectares
– The size of Canopy Growth’s farm in Colombia that now represents one of the largest fully licensed cannabis production facilities in the world. 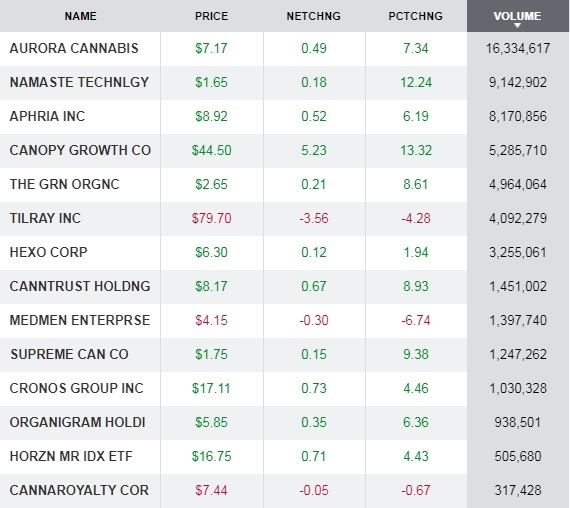