How far can pot prices fall in Canada?

Pot prices may be high in Canada but they should decline in the coming years, according to one leading cannabis analyst. BNN Bloomberg’s David George-Cosh spoke to BDS Analytics’s Tom Adams, who said the price of Canadian recreational cannabis has a “legality premium” worth as much as 75 per cent of the actual price. Prices could mirror how Colorado has seen spot prices fall by more than half after cannabis became legal in the U.S. state in 2014.

Shares of Cronos Group traded in negative territory for much of the day after the pot producer reported third-quarter results that showed its average selling price and gross margin declined compared to the same period a year earlier. Cronos’ revenue almost tripled from a year earlier to $3.8 million, but its average selling price for a gram of cannabis in the quarter fell to $7.32 from $8.01. Cronos CEO Mike Gorenstein said on a conference call with analysts that the “real effects of adult use” have yet to be seen. Meanwhile, The Green Organic Dutchman also released third-quarter results Tuesday, reporting that it did not generate revenue in the quarter.

Nanaimo, B.C.-based cannabis producer Tilray reported third quarter results late Tuesday, with revenue increasing to US$10 million, just short of the US$10.1 million analysts expected. The company sold 1,613 kg of cannabis from 684 kg in the prior year, all of which were categorized as medical marijuana as Tilray didn’t report any recreational pot sales in the quarter. Tilray reported an adjusted loss for last quarter of 8 U.S. cents versus an expected 12 U.S. cents per share loss.

Aphria’s newly-minted president Jakob Ripshtein expects mid-tier cannabis producers will be “challenged” to survive amid a glut of Canadian-based companies active in the industry. In an interview with Bloomberg’s Kristine Owram, Ripshtein notes that the cannabis industry will likely see a few larger companies stick around as well as some smaller producers akin to the craft beer market. His comments mirror similar remarks made by Canopy Growth CEO Bruce Linton back in August.

While the Ontario Cannabis Store may be back on track to deliver marijuana to residents in Canada’s most populous province, other areas in the country remain under a supply crunch. In Calgary, one of the city's two cannabis retail stores scaled back its planned hours to ensure it wouldn't run out of inventory while another store in the city had to shut its doors for the weekend. By the end of the year, more than 250 retailers will be operating across Alberta – hopefully with enough supply to keep customers happy.

Thailand approved a reform to legalize the medical cannabis on Tuesday, making it the first Southeast Asian country to do so. The Thai government said its proposal to update its narcotics laws would be presented to the Parliament. Also included in the legislation is legalizing medicinal use of kratom, a tree in Southeast Asia with leaves that are used as a stimulant, analgesic and narcotic.

“Clearly, the weed business is better than the flower business.”
– Herbert Teichmann, owner of a Montreal florist, on the unexpected demand of customers inquiring whether they have any cannabis for sale. 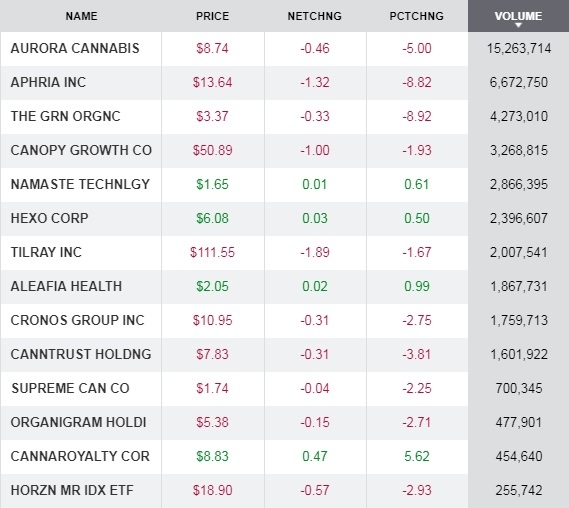