Namaste Technologies has fired CEO Sean Dollinger after wrapping up an internal investigation that identified breaches of fiduciary duty and self-dealing related to the sale of its U.S. division. The latest development comes after short seller Citron Research levelled a number of fraud allegations against the Toronto-based cannabis tech firm in October. Namaste said it has also launched legal action against Dollinger, and added that it is reviewing strategic alternatives after receiving “recent expression of interest in the company.”

Alberta-based High Tide said it has signed a letter of intent to acquire a minority interest in one of the lottery winners that was selected to apply for one of 25 initial cannabis retail licences in Ontario last month. The deal between High Tide and the unidentified winner comes amid of flurry of deal-making between retailers and pot producers to partner with potential licence holders. High Tide, which runs seven Canna Cabana cannabis shops in Alberta, said the letter of intent includes an option to acquire a greater interest in the Ontario lottery winner in the future.

The venture capital arm of Canopy Growth has closed a $17.4-million financing deal for Canapar Corp., the Canadian parent of Canapar Italy, an organic hemp production and processing platform. Canopy Rivers’ investment, which represents the first tranche of a $25-million non-brokered private placement, increases the company’s ownership in Canapar from 35 per cent to 49 per cent on a non-diluted basis. The increased investment comes as the Sicily-based firm works to develop cannabidiol-infused cosmetics, skincare and beauty products for the Italian cosmetics market.

The latest beef involving a famous rapper may be between Snoop Dogg and the Toronto Maple Leafs. According to a report by The Independent, lawyers representing the NHL team filed an opposition to Snoop Dogg’s attempt to trademark the name of his startup cannabis brand, Leafs by Snoop. The filing also says the cannabis brand’s logo is similar to the Maple Leafs’ logo, and the team is concerned it could confuse consumers. The Toronto Maple Leafs have a long-standing trademark over the spelling of “Leafs.”

DAILY BUZZ
“This is the agriculture of the future.”
– Green Relief CEO Warren Bravo on how his company uses freshwater fish waste to fertilize its cannabis plants 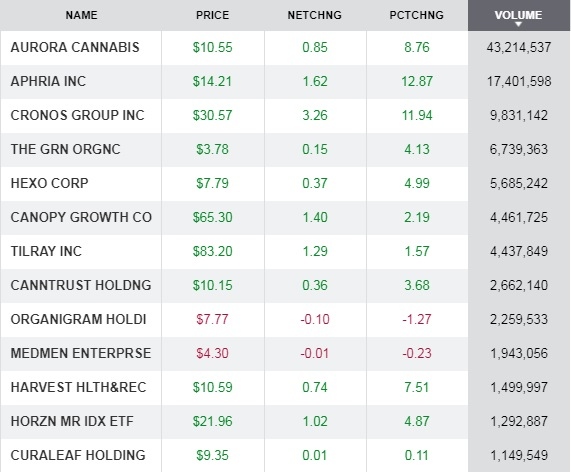