Weeks after being part of one of the biggest cannabis acquisitions ever, Marc Lustig is ready for his next adventure. While the chief executive officer of Origin House plans to stick around Cresco Labs as a director, he also has some thoughts on the future of the cannabis sector. Origin House swallowed up his company last month in a friendly, all-stock deal worth $1.1 billion. In a wide-ranging interview with BNN Bloomberg, Lustig estimates most pot firms will go bankrupt or insolvent within the next several years due to a lack of available capital, with some major producers likely to post significant write-downs. As well, he says it might take as long as five years for the black market to be fully eradicated in Canada.

New York is taking another run at legalizing cannabis in the state. The matter was dropped from the New York’s budget last month but a new state senate bill looks to push legal recreational marijuana as a significant source of tax revenue. The bill, which hasn't been introduced yet would regulate, tax, and create licensing requirements for recreational use and would also expand medicinal use of the drug, as well as regulating hemp products. However, some New York lawmakers say they won't support the legalization of marijuana without a test for impairment, specifically a breathalyzer.

Germany imported more than 750 kilograms of medical cannabis flower in the first quarter of this year, according to recent government statistics. The country is on pace to import about the same amount in 2019 as it did last year, roughly 3,000 kilograms, according to MJBizDaily. The website also said the German government has also provided new demographics of medical cannabis users in Europe’s largest market, with residents between 50 and 59 years of age receiving the most prescriptions per patient.

Flowr Corp reported it made $1.6 million in first quarter revenue in 2019, down from $2.8 million in its prior quarter. The Toronto-based cannabis producer, with a production facility in Kelowna, B.C., said in a statement that sales in the quarter were impacted by “challenges associated with processing and packing in a temporary area” as its planned permanent site is currently under construction. The company sold 211 kilograms of legal cannabis, down from the 405 kilograms it sold in the prior quarter. Jefferies described Flowr’s sales in the quarter as “disappointing" although other producers have encountered similar issues. “We continue to believe Flowr are set up to succeed long term, but today's scaling issues supports our view to stay on the sidelines at current levels,” Jefferies said in a research note.

$6.96
-- The price of a gram of cannabis in Canada, down 7.8 per cent from the prior week, according to the Cannabis Benchmark’s Canada Cannabis Spot Index. This equates to US$2,346 per pound at current exchange rates. 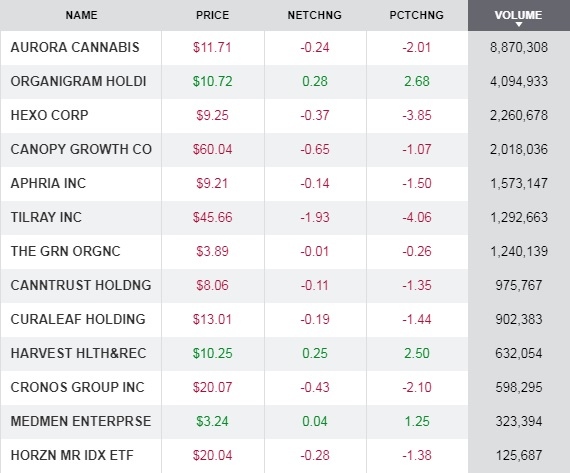