Sales figures for legal cannabis begin to trickle in

How much cannabis was sold in the first two weeks of legalization? About $43 million, according to Statistics Canada, which broke out the figure when it released its October retail sales indicator on Friday. If those figures are extrapolated to assume steady sales over an entire year, cannabis sales in Canada could climb north of $1 billion. Total cannabis sales accounted for about 0.08 per cent of Canada’s overall retail sales figures in the month, but will likely increase once the countrywide supply shortage eases and other form factors like edibles and extracts enter the market.

Cannabis lounges are set to become a reality in Alaska after regulators have approved rules for onsite consumption of marijuana at specially designated shops, the Associated Press reports. Cannabis users in the U.S. state will be able to consume pot in areas that meet ventilation requirements, and are outdoors or separated from a retail store by walls and a secure door. However, local municipalities could still ban these lounges or control how cannabis is consumed onsite, like smoking.

Dixie Brands eyes launch of edibles in Canada this October

With Health Canada unveiling draft regulations for the sale of cannabis edibles and extracts later next year, some companies are already gearing up to sell these infused products as soon as they are legally available for purchase. Dixie Brands says in a release that it will be ready to launch a full suite of products that include THC-infused beverages, THC/CBD topical products, CBD-infused supplements by October 2019. Many of those products have already been launched in the U.S. and Dixie said it will work with Auxly Cannabis Group to bring some of their cannabis edibles north of the border.

Quebec-based cannabis producer Hexo Corp. will soon begin trading on the New York Stock Exchange’s small-cap exchange as the company looks to tap U.S. investors ahead of a broad continental release of pot-infused beverages. If approved, Hexo, which already trades on the Toronto Stock Exchange, will join several other Canadian cannabis producers that have listed on the NYSE, including Aphria and Aurora Cannabis, after it submitted a filing to the U.S. SEC late Thursday. Hexo filed a Form 10-F to the SEC, the form required when a Canadian-based company intends to dual-list its shares on a U.S. exchange.

“Producing and building out what you’re doing today is the first thing you want to get right.”

– Organigram CEO Greg Engel on the need for cannabis producers to avoid stretching themselves too thin when looking for partners in the consumer packaged goods space.

BNN Bloomberg's Cannabis Canada newsletter will be taking a break and resume publishing on January 2. Have a safe and festive holiday break from everyone here at BNN Bloomberg. 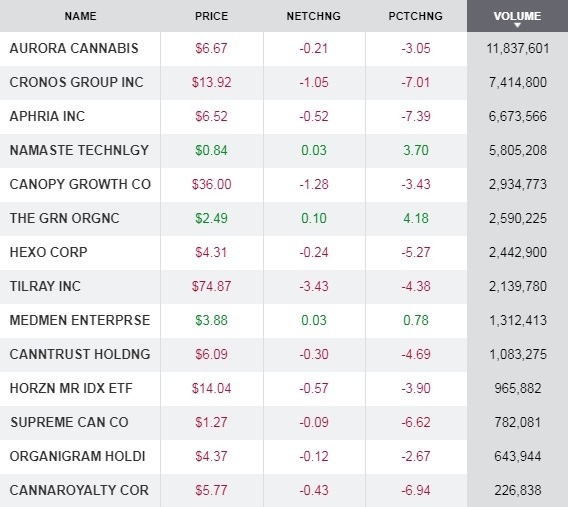