Embattled cannabis grower CannTrust Holdings warned in an update late Thursday of a potential “material” hit, depending on the outcome of Health Canada’s review on the company’s unlicensed production scandal. The pot company said it hasn’t been able to hold “substantive discussions” with Health Canada yet, and that the regulator hasn’t provided a timeline for its future decisions. CannTrust also said the New York Stock Exchange has warned it will "closely monitor" the company's filings and it could delist the stock.

Alberta pot producer Sundial Growers has come under fire after it allegedly sold contaminated cannabis to a partner company. A MarketWatch report citing sources familiar with the matter says licensed producer Zenabis Global returned half a ton of marijuana to Sundial after finding the batch was contaminated with mould, bits of rubber gloves and other non-cannabis material. Zenabis disclosed in its quarterly results Wednesday that it returned 554 kilograms of cannabis to an unnamed third party after it found it was "not saleable." Sundial debuted on the Nasdaq earlier this month.

The Green Organic Dutchman is now a recreational cannabis producer. The marijuana company based in Mississauga, Ont. said it made its first shipment of dried cannabis flower to the Ontario Cannabis Store, marking its debut in the Canadian adult-use market. TGOD's high THC United Organic strain, which was available to medical users earlier through a pilot program, will be sold on the OCS's website as well as select retailers in the province.

As cannabis becomes more mainstream, the market for personalized, high-end cannabis products is flourishing, according to a report from Bloomberg Businessweek. The trend is especially gaining steam in western  U.S. states like Oregon and California, where growers are seeking new ways to market their harvest as they continue to grapple with oversupply – an issue they have been facing since pot become legal in those states.

Canada’s ban against advertising by cannabis producers is making it trickier for the country to really discuss risks associated with the drug, according to marketing expert John Yorke. The CEO of marketing agency Rain43 spoke to BNN Bloomberg about the evolution of anti-pot advertising since Canada legalized the substance, pointing out that government ads have become more subtle as they need to strike a balance between educating users while also not belittling them. “Everyone is in a tight box. No one knows what to say,” Yorke said.

$28.5 million
-- The total compensation of Canopy Growth’s top six executives last year, including the first months after cannabis was legalized in October. 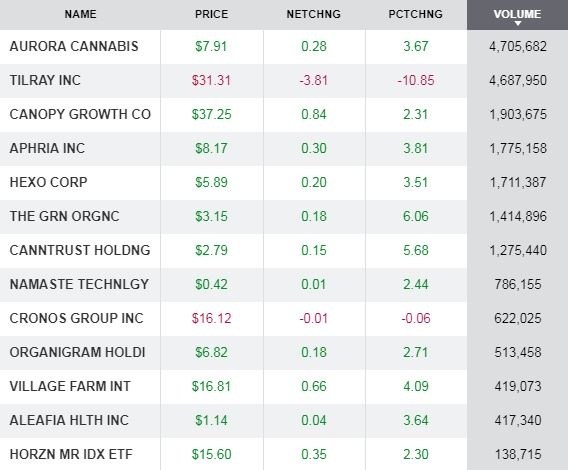