April 1 will be the start of licensed recreational cannabis stores in Ontario, a highly anticipated milestone in the still-nascent days of legal marijuana in Canada. Despite the province changing its pot retail plans several times, these stores are expected to play a major role in boosting sales of legal pot in Canada’s biggest market. BNN Bloomberg talked to some of the key players who’ve been toiling away for months getting these retail locations ready for prime time including the licence winners, the retailers, the lawyers and the suppliers who all participated in the process.

Could Spain embrace legal cannabis and emerge as the world’s greenhouse?

Spain apparently has some of the world’s most active research teams looking into cannabis, but the drug remains illegal for medicinal and recreational purposes. El Pais reports that there could be a risk that Spanish players could miss out on the billion-dollar global industry - of which a significant portion could be in Spain. Some Spanish cannabis industry insiders believe the country could emerge as the world’s greenhouse and supply one-third of the global marijuana seed supply.

A closer look at MedMen’s finances highlights the risks of the U.S. marijuana industry

California-based retailer MedMen Enterprises had its latest financial troubles highlighted by CNBC, which noted that the company is racing to raise cash to cover its mounting losses. The report suggests the company’s recent financial struggles could serve as a warning for the marijuana industry, specifically operating in states where high taxes and dispensary restrictions have driven up prices for legal marijuana. Last week, MedMen averted an immediate financial crisis by securing a $100 million credit line from a cannabis-focused investment company. However, it came with relatively onerous terms and put the company under pressure to report big profits within the price-sensitive market of current heavy users.

Boulder, Colo.-based Charlotte's Web Holdings reported financial results for the fourth quarter ended Dec. 31, with revenue of US$21.5 million and US$3.2 million in net income. Charlotte's Web, which produces hemp-derived CBD products for the health-and-wellness markets, said it produced a record harvest of 675,000 pounds of hemp in 2018. With the company soon to supply CBD products in U.S. Walgreens, CVS and Safeway stores, PI Financial increased its 2019 revenue outlook to US$144.8 million, from US$140.0 million.

$6.96
-- The price of a gram of cannabis in Canada, down 2.3 per cent from the week before, according to the Cannabis Benchmark’s Cannabis Spot Index. This equates to US$2,356 per pound at current exchange rates. 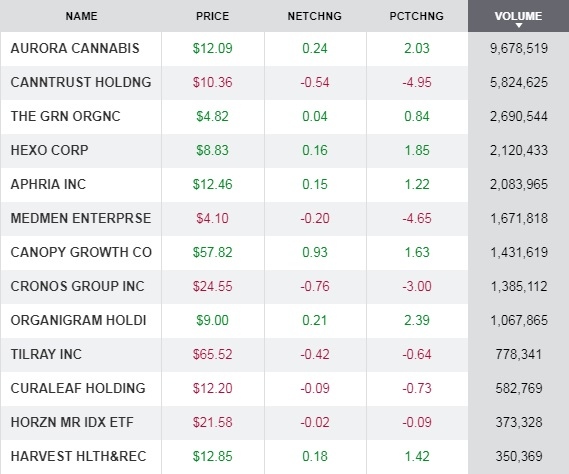