The Canadian Securities Exchange has recently emerged as a key hub for Canadian cannabis producers looking for an amenable exchange that would allow them to tap into public markets. As BNN Bloomberg's David George-Cosh reports, the CSE has become the go-to platform for larger and more mature U.S. cannabis companies that sport billion-dollar valuations. Curaleaf and Acreage Holdings are among the U.S. firms looking for a friendly exchange to list under. Meanwhile, the TMX Group, the country’s dominant exchange operator, offers a more restrictive policy for cannabis firms that do business in the U.S.

Legal weed in Canada enters its second week and supply shortages are still frustrating consumers as well as some growers. Bloomberg's Kristine Owram reports that cannabis producers are still waiting for Health Canada to provide them with a sales license despite filling out the required paperwork. As the backlog mounts, awarding growers with new sales licenses would do well to end the pot drought that has hampered the roll-out of legal recreational marijuana across the country.

The uncertainty from U.S. border officials on whether Canadian cannabis industry players will be able to cross the border isn't going away ahead of an influential cannabis conference in Las Vegas. The Canadian Press reports that even if a Canadian traveler's cannabis business does not operate in the U.S., they could still be denied entry if their travel activities are cannabis-related.

British Columbian cannabis consumers are growing frustrated by the sluggish roll-out of legal pot in the province, experts say. B.C.’s deep-rooted cannabis culture is making it hard for some to switch over to the legal market in a province that has opened just one legal pot retail store. Supply issues outside of B.C. should subside over the next three-to-six months, so constraints on supply will no longer factor into price, but it's unclear whether that alone will be enough to snuff out the black market.

150,000
– the amount of orders processed by the Ontario Cannabis Store in the first week of recreational pot legalization 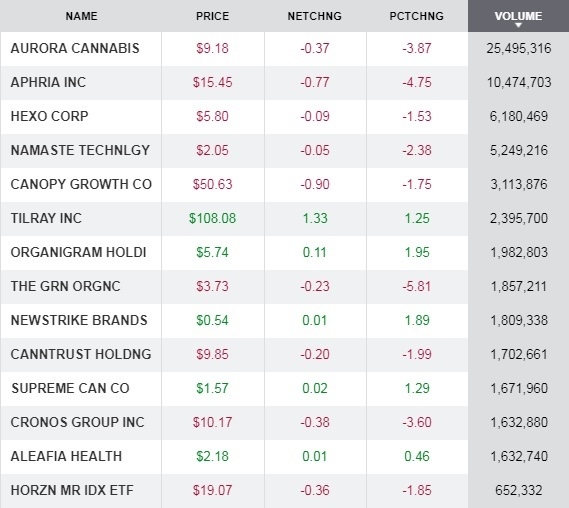