U.S. banks hesitant to do business with cannabis firms — but that may change

In their push to expand the market for legal cannabis in the U.S., lobby efforts have turned to changing the law to allow the big U.S. banks to become involved in the industry. That comes as the U.S. House of Representatives held a subcommittee hearing Wednesday on the SAFE Banking Act that would protect banks that service cannabis companies that comply with state laws. Analysts expect the cannabis-related financial services bill to be passed sometime next year. Cannabis stocks traded mostly higher throughout the day ahead of the hearing with the Horizons Marijuana Life Sciences Index ETF in positive territory throughout Wednesday’s session..

Those Tragically Hip fans who find themselves at the nexus of being both in the band’s hometown of Kingston, Ont. and curious about cannabis are in luck. Up Cannabis, the cannabis producer backed by members of The Hip, plans to have an "experiential hub" inside one of Ontario's first legal recreational pot stores in Kingston. The “store within a store” will be in a shop operated by Spirit Leaf Inc. and Up Cannabis. Plans were announced to have its branded customer lounges featured in Spiritleaf stores as regulations allow.

Choom is coming to Ontario. The Vancouver-based cannabis retailer said in a statement on Wednesday it entered into a letter-of-intent agreement with one of the 25 cannabis retail lottery winners to open a location in Ontario. Choom said it secured the rights to 54 cannabis retail opportunities across Western Canada, with 10 locations under construction and an additional 17 stores completed..

The European Parliament voted Wednesday to move a resolution that would help advance medical cannabis forward within its 28 member states to address barriers to medical studies, identify research priorities and improve access to cannabis-based medicines, according to Marijuana Moment. The vote is more of a symbolic development that could usher in new funding and research at the EU level to develop regulatory and research models for medical cannabis. The vote comes on the heels of reports the World Health Organization will look to recommend striking it from its list of drugs it deems the most dangerous.

“There has obviously recently been increased consumer interest around the role that cannabis can play in intimacy.”
– Aurora Cannabis spokeswoman Heather MacGregor on marketing cannabis products for Valentine’s Day. 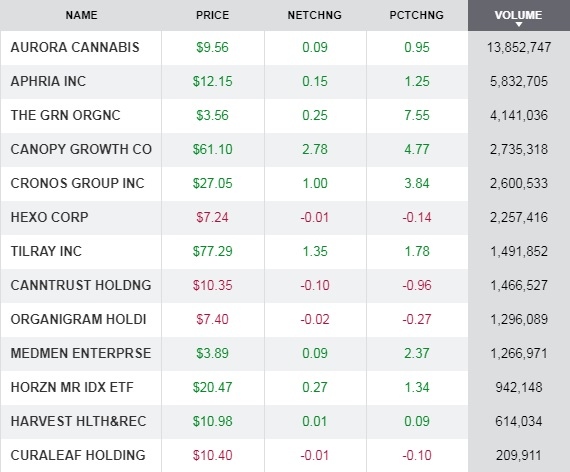