Nova Scotia and Prince Edward Island are the first two provinces that have reported monthly sales figures to producers, according to documents provided to BNN Bloomberg. The figures show that Moncton, N.B.-based Organigram took the top spot with a 24 per cent share of the marijuana market in both provinces. Other smaller players among the top five producers by sales include Zenabis, Cronos Group’s Peace Naturals and Canada’s Island Garden.

Who will win the global race for cannabis supremacy?

Canada has legalized it, while the U.S. is slowly decriminalizing it across the country. But with billions of dollars poured into North America’s nascent marijuana industry, will it be the U.S. or Canada that wins the race for cannabis supremacy? That’s the question posed by Bloomberg’s Craig Giammona and Kristine Owram who looked at whether Canada’s head-start in legal pot is enough of an advantage for the country’s producers. While some Canadian companies are extending their reach globally to sell medical marijuana, U.S. players are seeing their fortunes rise as more of the world’s largest consumer economy’s population gets access to legal pot.

The U.K. medical marijuana market is getting a boost thanks to one of the world’s biggest cannabis growers. Bloomberg reports that Canopy Growth, along with a consortium of investors, are collectively putting together nearly US$10 million to test medical cannabis for treatment of pain and opioid dependence in Great Britain. The U.K. legalized medical cannabis earlier this month, but adoption has been slow, leaving companies like Canopy picking up the slack to ensure that a market for marijuana – first with medical, but eventually recreational – will exist in the European nation.

You’ll never guess who won Top Bong of the Year

The Canadian Cannabis Awards took place Thursday and CannTrust emerged as one of the night’s big winners. The Vaughan, Ont.-based pot producer took home seven awards including licensed producer of the year, as well as top sativa flower and top high CBD flower. Bruce Linton, co-CEO of Canopy Growth, was awarded a lifetime achievement award, while Cronos Group CEO Mike Gorenstein was feted as innovator of the year.

Luxembourg to be the next country to legalize cannabis

Luxembourg appears to be set as the next country to legalize recreational cannabis. The tiny landlocked nation may become the first European country to allow for the use and sale of adult-use recreational cannabis, according to Luxembourg Times. Despite a population of about 600,000 people, the country could sell to a market as big as 10 million if non-residents from surrounding European countries such as France, Belgium and Germany can visit and purchase the drug.

“Calming, relaxing, energizing.”
–  Words used to describe marijuana that played on a video shown in a Quebec cannabis retailer that may contravene a provincial law by advertising the positive effects of pot to the general public 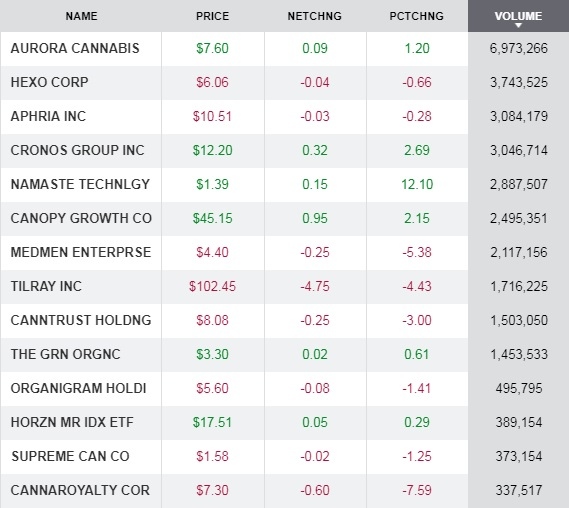