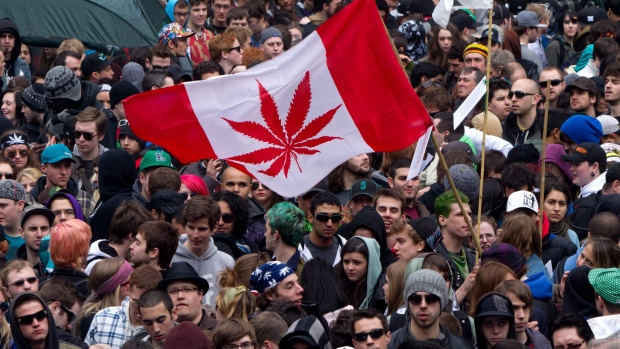 A Canadian flag with a marijuana plant on it instead of a maple leaf is carried through the crowd during a rally in downtown Vancouver , The Canadian Press/Darryl Dyck

U.S. bill on allowing banking services for pot companies may be passed this month: Lobby group

A U.S. Congress vote of pro-cannabis legislation may be happening sooner than previously thought. Marijuana Moment reports that American Bankers Association CEO Rob Nichols predicts the U.S. House of Representatives will pass legislation allowing state-legal marijuana businesses to tap financial services as early as this month. That would be sooner than the “early 2020” time period that some analysts expected Congress to pass the Secure and Fair Enforcement (SAFE) Banking Act. While a pro-marijuana banking bill could pass the House, getting that legislation through the Republican-controlled Senate may be a tougher act. Nichols stated cannabis banking access is “critically important” to the U.S. banking lobby group, and will be “the front-and-center issue” for the ABA as lawmakers return from their summer break.

It looks like those lofty expectations for Canada to emerge as a cannabis tourism hub may be headed up in smoke. The CBC reports that a push for Canadian tourism bureaus to advocate for legal pot tourism activities and events is “virtually non-existent”. That’s likely due to the restrictive nature of the legal cannabis industry where current rules make it hard to market pot-related activities in fear of running afoul of federal regulators in the still-nascent space. There are less than two-dozen locations in Canada that offer lodging with complimentary cannabis, and only a handful of tourism-specific activities that are pro-pot, the article shows.

Former U.S. Food and Drug Administration Commissioner Scott Gottlieb says the U.S. government needs to take a harder approach in regulating cannabis products following reports of a rise in vaping-related illnesses. Gottlieb told CNBC on Monday that the illnesses – which span at least five documented deaths and 450 possible cases – may be a result of using illegal or counterfeit vape products. “We have to have a federal reckoning here,” Gottlieb said. He added that some U.S. states that have legalized cannabis, either recreationally or for medical-use, don’t have full oversight over the products being sold in those jurisdictions, leading to a greater risk to public health and safety. Earlier in the day, the U.S. FDA warned Juul Labs that may have violated the law by making claims its e-cigarette devices are safe.

Organigram announced it has received approval from Health Canada for the licensing of 17 additional cultivation rooms at its Moncton, N.B. facility. The newly licensed rooms gives Organigram an extra 15,000 kilograms of annualized production capacity and should begin harvesting product by the end of November, the company said. The company has an additional 16 rooms it anticipates Health Canada to approve licensing for later this month, while Organigram stated it has also submitted approvals for its edibles facility.

44
– The number of Canadians who have been given pardons for crimes related to cannabis usage or possession since the Canadian government announced a long-promised amnesty program earlier this year. 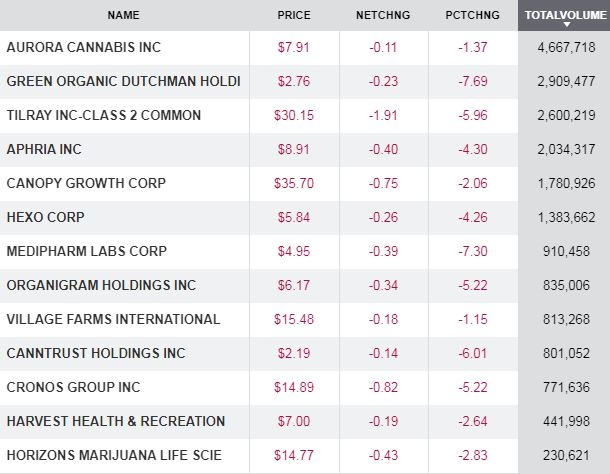