Famed pot activist and entrepreneur Steve DeAngelo is behind one of the first six licensed cannabis businesses in the U.S. Next week, the company that he co-founded, Harborside, will go public on the Canadian Securities Exchange. DeAngelo, who also co-founded Arcview Research, told BNN Bloomberg that he’s been a cannabis advocate for decades due to its far-reaching health purposes but so far hasn’t been impressed by some of Canada’s pot shops or the product sold there. “The cannabis had an extremely low terpene profile,” DeAngelo said. “What I saw was mostly terpene-free cannabis. It just wasn’t very attractive.”

With several cannabis ETFs emerging for investors’ attention, one issuer hopes its ties to the Ultimate Fighting Championship will help give it an edge on its competition. Bloomberg reports the ETF Managers Group - best known for the ETFMG Alternative Harvest ETF - has signed on as the official training sponsor of Alexey Oleynik, the ninth-ranked UFC heavyweight. MJ has been one of the best-performing unleveraged U.S. ETFs of the year. The UFC sponsorship is targeted at individual shareholders who don’t necessarily follow the financial media but may be big mixed martial arts fans.

It appears that Congress may pass far-reaching marijuana reforms this year, according to Colorado Senator Cory Gardner. Marijuana Moment reports that Gardner said that he has “pretty good confidence” that there’ll be legislative momentum on the cannabis file this year, citing conversations he’s had with key committee chairs and President Donald Trump. Gardner - who is the lead GOP sponsor of separate bills to let cannabis businesses access banking services and to protect states that have legalized from federal interference - noted that there’s bipartisan support for legalizing cannabis. “It’s a sign that it’s no longer acceptable for the status quo [to continue] and we need to actually fix this conflict in federal and state law,” he said.

Colombian cannabis producer PharmaCielo announced it acquired Creso Pharma for $122 million Australian in an all-stock deal on Thursday. Creso Pharma specializes in research and development, and production of therapeutic, nutraceutical and animal health products in the cannabis space. The Australian company has commercialized four proprietary branded products in less than two years, including both human and animal health focused CBD-based nutraceuticals and complementary feed products. PharmaCielo said the deal would bring its Colombian cannabis oil production to market immediately and tap Creso’s sales presence in 13 countries including Australia, New Zealand, Brazil, Switzerland and Germany. The acquisition is expected to close by September, the company said.

$35 million
-- The value of the public offering announced by Aleafia Health on Thursday for convertible debenture units with an interest rate of 8.5 per cent 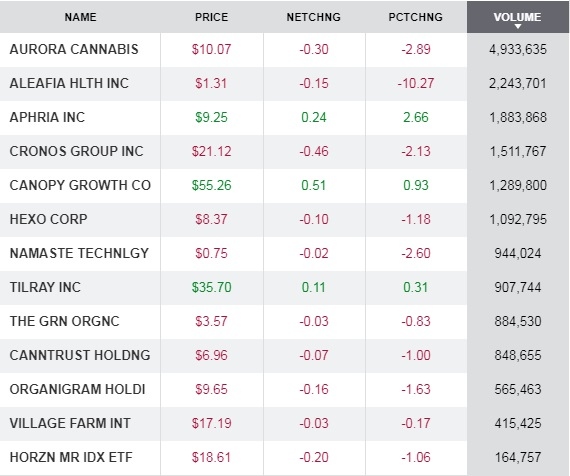