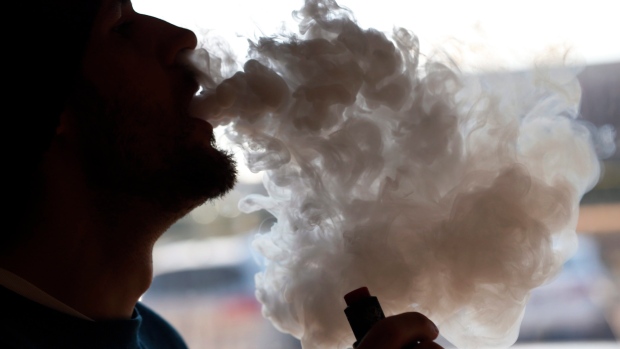 Richmonder Coleman Wheeler emits a cloud of smoke from a vape pipe at a local vape shop in Richmond, Va., Friday, Jan. 18, 2019. Auxly Cannabis Group Inc. of Vancouver will receive a $123-million investment as well as global licences to vaping technology under a research and development partnership with tobacco giant Imperial Brands. , THE CANADIAN PRESS/AP, Steve Helber

MedMen Enterprises said Tuesday that the U.S. Department of Justice’s Antitrust division’s 30-day review period for its proposed acquisition of PharmaCann expired with no further follow-ups requested. The company described the event as a “monumental day for the cannabis industry” and should clear a major hurdle for the deal to close sometime by the end of the year. Canaccord Genuity analyst Matt Bottomley said in a note to clients on Tuesday the DOJ’s decision – or lack of a decision – should result in other major U.S. cannabis deals moving forward and could spark a new wave of M&A in the U.S. cannabis market. “We believe this is more of an educational process for the DOJ, as opposed to objective issues with any particular announced deals to date,” Bottomley said. The DOJ didn’t return a request for comment to BNN Bloomberg on why it let its review period expire.

Kelowna, B.C.-based cannabis extraction firm Valens GroWorks provided guidance for its third-quarter financial results on Tuesday, stating its revenue should come in between $16 million to $17 million, nearly double what the company reported in its prior quarter. Valens added it expects to report that it has extracted over 26,000 kilograms of cannabis and hemp biomass in its third quarter as the company ramps up operations ahead of the legalization of next-generation cannabis products this year. The company extracted 8,547 kilograms of dried cannabis and hemp biomass in Q2, it said. It expects to have enough capacity to handle 1 million kilograms per year by the first half of next year.

Canadian interest in cannabis vape products may be weaker than previously expected after a rash of U.S. illnesses and deaths linked to vaping, the Canadian Press reports. Jennifer Lee, the cannabis national leader at Deloitte Canada, said there could be some “hesitation” in the market following media reports that as many as five people died and hundreds more have fallen ill due to vaping. Other cannabis experts state that a sizable amount of the reported illnesses appear to be linked to extra ingredients used as cutting agents in cannabis oils which are commonly used in the illegal market. The illicit vape market in Canada is estimated to be worth roughly $1 billion, according to the Cannabis Council of Canada.

Plans to introduce legislation to set up a state-owned bank in California tasked with dealing with the legal pot market were scuttled on Tuesday by the bill’s sponsor, the Sacramento Bee reports. Sen. Bob Hertzberg said he plans to re-introduce the bill during the state’s 2020 session after pulling it from a vote on Tuesday. “If we’re going to do this, we have to do it right,” Hertzberg said in prepared remarks. “We owe it to the dozens of cities, counties, and cannabis industry officials who have been supporting this effort to see it through.” U.S. banks have been wary about working with cannabis companies as marijuana remains illegal on a federal level, despite dozens of states legalizing the drug for either medical and recreational – the new bill would allow banks to accept deposits from pot companies and allow them to issue “special purpose checks.”

-- The amount of cannabis private retail sales in Canada in August, up 6 per cent from July, according to Cova Software, which provides point-of-sale services for North American cannabis retailers. The company tracks sales from 373 private Canadian stores, an increase from 306 stores in July. 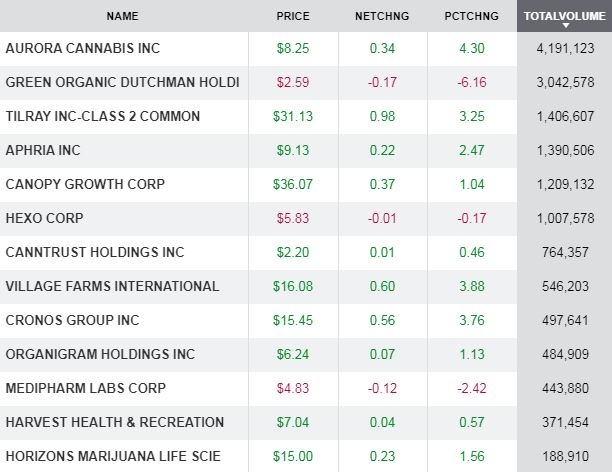