On the one-year anniversary of legalized recreation cannabis is Canada, gummies, beverages and vapes are just some of the pot-infused products that are now legal. However, these products won’t immediately be seen on store shelves because of a mandatory 60-day notice period companies must provide to Health Canada before selling them. That means the earliest these edibles can legally go on sale in Canada is mid-December.

The CEO of Hexo says that yesterday’s unveiling of one-ounce bulk offerings that come in 50 per cent below the going legal cannabis price is not an effort to move excess product on the cheap. “This is not a loss-leader. This is a long-term sustainable product offering,” Hexo CEO Sebastien St-Louis told BNN Bloomberg Thursday. Instead, St-Louis said the $4.49-per-gram offering is aimed at pulling some black market business into legal purchases. “Less than half of Canadians are currently shopping legally. … With this offering, we think that really doubles the available market,” he said.

Truss Beverage Co., the joint venture between Molson Coors and Canadian cannabis producer Hexo, says it will launch CBD-infused spring water and beverages containing THC, the psychoactive chemical in pot, by the end of this year. The announcement comes a week after its competitor Fluent Beverage Co. – a JV between Anheuser-Busch InBev and B.C. pot firm Tilray – said it was launching CBD drinks as early as December.

A major recall of cannabis in Colorado appears to be the largest such return of contaminated product in the world. Cannabis Now reports that Colorado cannabis producer Bonsai Cultivation voluntarily moved earlier this week to take its products off the shelves of 144 retail stores in the U.S. state. The company’s product allegedly contained potentially unsafe levels of yeast or mold following an investigation by Denver’s Department of Public Health and Environment. While it appears that no one got sick from using the recalled cannabis, industry experts say the entire process demonstrates “effective implementation of regulatory oversight” for the legal recreational pot market.

38 moose
-- The weight equivalent of the 19,000 kilograms of cannabis that has been sold in Ontario in the first year of legalization, according to the Ontario Cannabis Store. 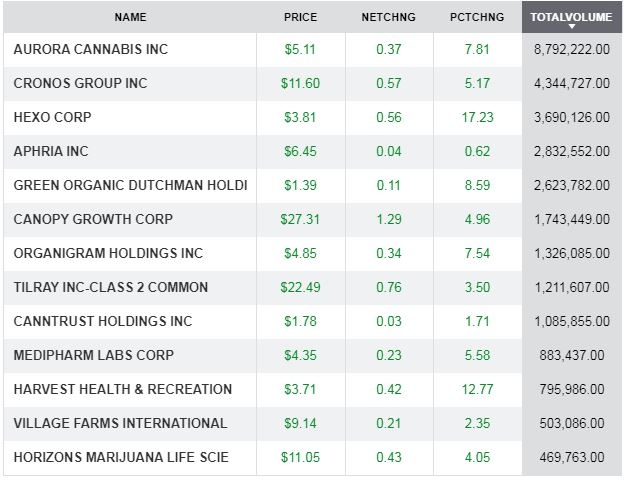